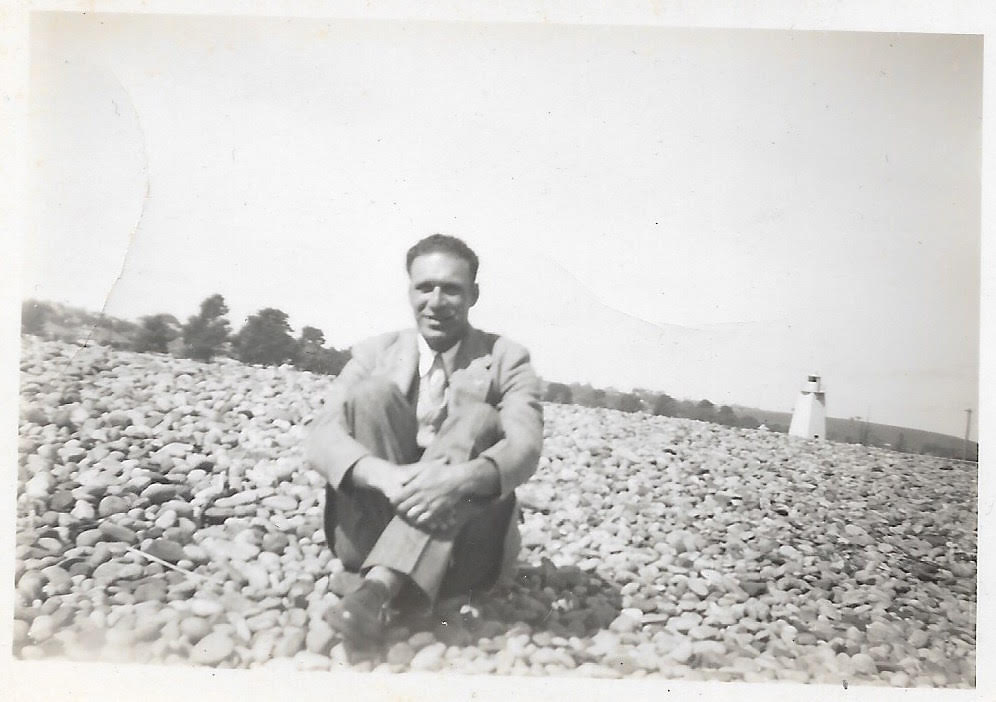 When my grandfather and his partner packed up their place in Lindfield and moved to Kiama – retiree heaven – Mum agreed to house some of his stuff. My grandfather turned ninety-nine last month; a century’s worth of amassed possessions were disseminated between various family members. Their new apartment could only fit the essentials. Mum and I received his extensive (borderline obsessive) collection of Hitler- and Holocaust-related literature and six large cardboard boxes labelled “Medical Books” and “Albums 1980” and “Documents.” For a long time the boxes sat in the study taped up, at home in our room for things with no home.

I arrive at Mum’s in the afternoon. Every time I go back home I find the quietness of my old street disconcerting. I’ve grown to like the New Canterbury Road air, thick with dust and movement. Two a.m. bursts of Avicii from wound-down windows. Mum greets me at the door and says it’s good to see me. When I moved out, I promised to be home every week but that’s a lot easier to say than do. She says she’s started the task of cleaning out the study. The majority of the junk is mine: high school textbooks, half-finished stories typed up and strewn over the desk, disposable camera photos of me at thirteen with friends pouting and throwing peace signs. An impossible number of pens, random trinkets I brought home from my travels in South East Asia two years ago.

“And the boxes,” Mum says from over my shoulder as I examine the flotsam. “We need to sort through them.”
She grabs one, and hugging it like a child, waddles to the dining room table and drops it with a thud. Heavy. Its absence in the study is glaring, one square missing from a six-square wall. The box that sat underneath it is lighter, its colour preserved by weight and darkness. Dust particles fly free above it, dancing in the afternoon glow.

“Tess,” she calls, “come and help.” I follow.
With my nails I pick at the thick brown tape fastening the box shut.
“Use these,” says Mum, “don’t wreck your nails.” I take the scissors, glide one blade along the tape and wrestle the cardboard open. Staring back at me is the word HOLOCAUST written on a cream manila folder in hot pink highlighter and underlined twice.

I open the folder and a frail wisp of paper flies out, caught in the gust. I catch it and read the headline: AUSCHWITZ: TRUTH TOO PAINFUL TO BELIEVE. It’s written by Holocaust survivor, George Ryba. The clipping has faded to the colour of parchment and it’s delicate; years undisturbed have thinned the life from it. I sniff it. It doesn’t smell like newspaper—the scent of print is long gone. It smells like oak and musk, like age, finally given fresh air to breathe. I imagine my grandfather at his dining table, flicking through the newspaper and reading the headline I’ve just read, trailing the words beneath my fingers with his, thinking that it needs to be saved. That one day in the future someone should read it. He’s photocopied it twice; the proxies are printed on A4, stark in their Xerox black and white. I read the article slowly and George Ryba’s words stain my mind.
“In my view it is a very human characteristic to believe what one wants to believe,” he writes. “The experience of others, rationality, logic and information are so often irrelevant to what people believe.”

I type the name Frederick Toben into my phone browser and learn that he’s Australia’s most notorious Holocaust ‘revisionist.’ In 1994 he founded The Adelaide Institute, a Holocaust denial group, and has been arrested in Germany, the UK and Australia for Holocaust-denial related charges.
“Do you know who Frederick Toben is?” I ask Mum who’s back in the study.
“He’s that Nazi nutter from Adelaide.”
“Yep.”
Mum comes back into the dining room holding another box. I hand her the clipping. She glances at it and quickly puts it back down on the table.
“I can’t read it. It’s too awful.”
“This guy, George Ryba, actually worked in the gas chamber and Toben still doesn’t –”
“Tess, please, don’t. I can’t think about it.” She goes back to the study.

I turn the clipping over to try and find a date. I scan through what at first looks like classifieds, until I realise it’s the obituary section. Little square plots of newspaper summarising lives in 50 words or less.

“Relatives and friends are invited to attend the funeral service for Linda, to be held at Rockwood Crematorium, East Chapel, Lidcombe, on Friday (May 7, 1999), commencing 10:30am.”

“Mum,” I call out, “how weird is this? The obituary section is on the back of the Auschwitz clipping! Don’t you think that’s crazy?”
“Can’t you find something else besides that clipping? It’s all just death,” she calls back.
“But the synchronicity, isn’t it spooky?” She doesn’t reply.

I put the clipping to the side and begin sifting through the folder. A lot of the pages are copies of documents I’ve seen before. My grandfather’s naturalisation certificate, a copy of his old German passport, a three-page curriculum vitae he typed up years ago overviewing his life, from his childhood in Berlin to the time he was made medical superintendent of Prince of Wales Hospital. I listen as Mum sorts through the study desk. Silence. Sometimes I forget she’s closer to it all than I am.

“Looks great, Mum.” An hour later and the study looks like a different room. She’s hoisted the venetians up to let in the sun. “Move over Marie Kondo.”

“It’s a start! Now let’s go do the shop. The rest can wait till tomorrow.”

I follow her out to the car. I wonder if George Ryba is still alive, and if perhaps he is right, if the Holocaust could be treated as a figment of someone’s imagination one day. Through the car windscreen the street is coloured a fierce orange. We squint and cover our eyes with our forearms. Nothing can be seen except the sun’s angry descent below the asphalt-covered hill.

Tess Scholfield-Peters is a Sydney-based writer and doctoral candidate at the University of Technology, Sydney. Tess is interested in third generation Holocaust authorship, representations of trauma and empathy in literature, and the intersection between historical and fictional writing.