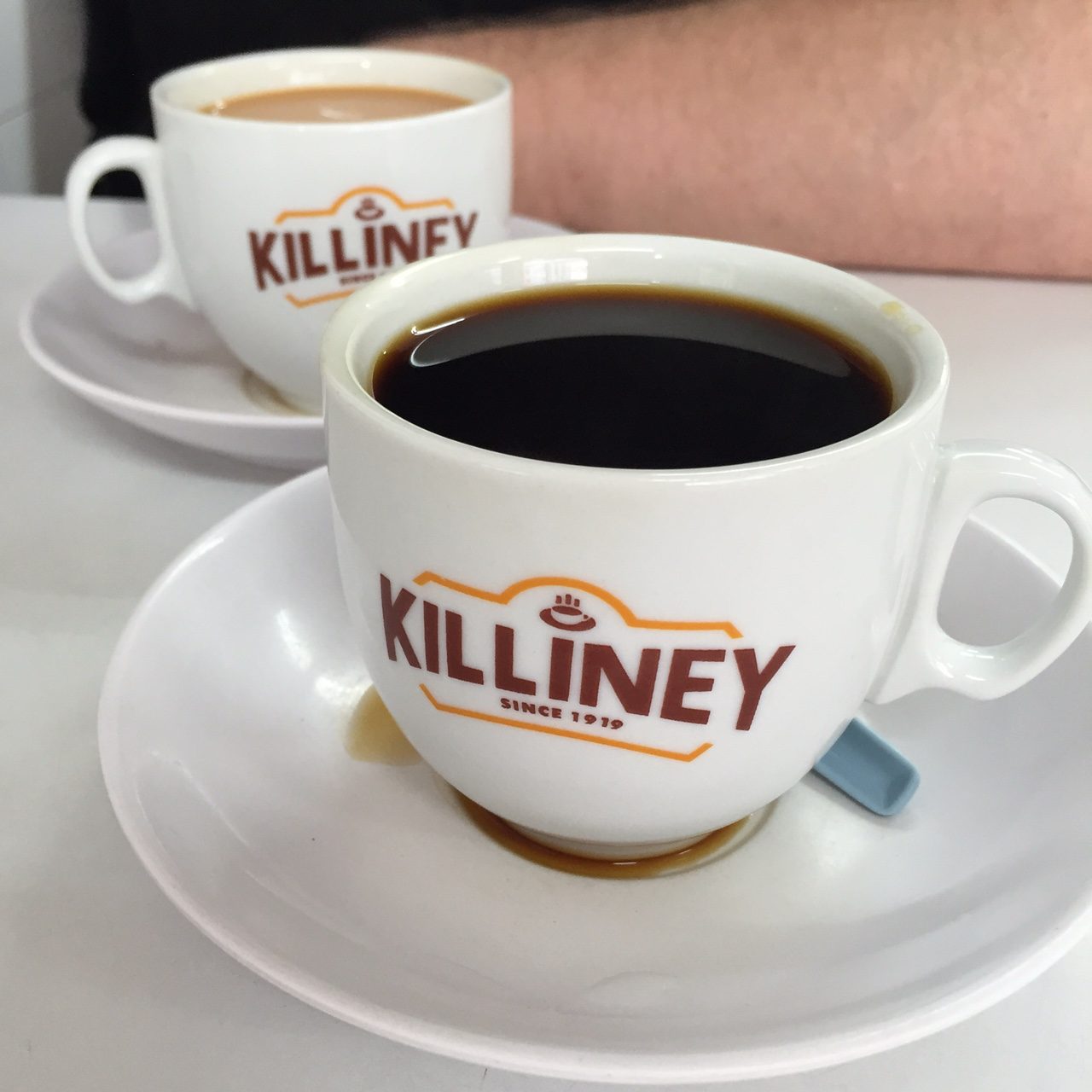 Food is serious business. I live in a suburb with so many restaurants that if you went out to eat every night of the week, you wouldn’t be a repeat customer at any establishment for about a month. Once, when I walked past a restaurant on my way home, I saw a famous food critic sitting at a table alone, his chins deep in his cravat, looking rather severe as the table filled up with plates of food. I didn’t see a notepad; perhaps he was so capable of taking notes in his head, utilising vocabulary such as ‘unctuous’, ‘delectable’, ‘expertly plated’, ‘miasma of taste’…

For me, food is history; it is memory. I grew up in Singapore in the 1980s. Recess break at school was about rushing to the tuckshop and joining the queue for one of five or six food stalls. Here’s what I remember, nearly thirty years later.

There was the hot soup lady: you picked your noodle (mee – yellow Hokkien noodles, mee kia – thin egg noodles, mee pok – flat egg noodles, bee hoon – thin rice vermicelli, kway teow – flat rice noodles, or a mix), whether you wanted it in soup, or dry with a sauce. The basic noodle dish, at fifty cents, came with several slices of fishcake and two fishballs. You could add fresh vegetables (chye sim – one of my friends got a bonus live caterpillar with her vegetables once, or tau gay – beansprouts), more fishballs, or even pork meatballs (Chinese-style, factory-made, bound with flour). An order would sound like this: “Fifty cent yellow noodle soup”, or “dry bee hoon no chilli add tau gay”.

There was the rice stall, where you picked servings of pre-cooked dishes to go with a serving of rice. Examples of these dishes would be fried eggs, steamed eggs, stir-fried vegetables, sweet and sour pork, pork slices stir-fried with spring onions and ginger, deep fried chicken wings… You pointed at the dishes, your selections would be put on a plate with rice, and the cost would be added up depending on what you ordered. Meat dishes cost more than vegetable dishes. If you charmed the uncle or auntie (respectful terms for adult males and females), they would give you more at the same price. I rarely ate at this stall, because the food was too similar to what I would eat for dinner at home.

The snack stall sold savoury snacks such as steamed tapioca cakes, hot dogs in soft buns, and what was to be my entry into spicy food, otak otak, a spiced fish paste sealed into attap leaves and grilled over charcoal. There was a ‘white’, non-spicy variety that I usually ordered. One day, the auntie made a mistake and gave me a spicy one. I was too hungry or embarrassed to return it, and ate it. I never bought the non-spicy version again.

The Muslim food stall served dishes such as mee rebus (a wonderful Chinese-Malay hybrid dish consisting of thick yellow noodles in a gravy made with sweet potato and tau-cheung – fermented beans, topped with fried cubes of beancurd, beansprouts and a sliver of boiled egg, which the Makcik would magically cut with a fishing line), mee siam (another hybrid dish of rice vermicelli in a tangy tamarind gravy), beef or mutton rendang (a kind of Indonesian dry curry) with nasi briyani, and my great weakness, epok epok, the Malay-style half-moon-shaped curry puff filled with curried onion and sardine, or potato and egg, like a spicy pastie.

Then there was the Indian food stall, where you could get roti prata (known in South India as roti paratha, and in Malaysia as roti canai) with chicken, fish or vegetarian curry, Indian-style curry puffs (deep-fried, triangular, with a crunchy, flaky filo-like pastry, filled with potato and mutton curry), tandoori chicken with rice, and brightly coloured Indian sweets such as barfi, which is similar to the Australian coconut ice.

Across one end of the canteen was the drinks stall, where you would buy fizzy soft drinks, packaged ice creams, lollies and snacks like crisps, cotton candy, as well as Asian drinks like cold, sweetened chrysanthemum tea, barley water, lime juice, grass jelly, coconut juice with pulp, and bandung – a mix of rose syrup and evaporated milk. You could get a tiny packet of salty biscuits for ten cents, or an ice pop for twenty cents. At age seven, I had a whole dollar in pocket money, which increased to a dollar-fifty when I was nine, then two dollars when I was twelve. This was to be my first understanding of the concepts of wage increase and inflation.

When I went home after school in the early afternoon, I might have lunch with my grandfather, who loved to take me to eat at a food stall near our home. It sold minced pork and mushroom noodles, which was one of the last meals he asked for when he was home after major surgery for liver cancer. At home, I would ask him if he wanted a coffee. I loved making him coffee. I loved measuring out the instant coffee granules (Nescafé), spooning in the thick condensed milk, adding the scalding water from the thermos (the only time I was allowed to use it), and the sound of the teaspoon rattling against the glass. Or he might sit at the sofa in front of the TV and perform a tea ceremony. He would boil water in a small kettle on a hotplate right there on the coffee table, steep Chinese tea leaves in a little teapot, and serve tea in tiny handle-less cups on a bamboo tray.

My grandmother usually cooked the family dinner as my mother would still be at work. There would always be a clear soup (my favourite was winter melon soup with carrot, water chestnuts, mushrooms and chicken), a vegetable dish, a meat dish and at least one other dish, plus steamed white rice. One of my grandmother’s specialities was deep fried fish fillets, which she would coat in a light batter seasoned with dried plum powder. This lent the fish an irresistible sweet-salty taste. The fillets would later be covered in a gravy, but I would try to sneak as many of the crisp morsels before I was yelled at to get out of the kitchen. Another of her Hokkien specialities is sliced pork belly braised in soy, served with steamed chinese buns, to be assembled at dinnertime – the only time you were allowed to use your hands to eat.

Years later, one of the first indications of my grandmother’s dementia was when she went on a family trip with my aunty to Penang in Malaysia. Grandma couldn’t recall the location of a famous fried noodle stall (Penang char kway teow). They went around in circles before they finally gave up, with great disappointment.

After I turned sixteen, I was allowed to date. The first boy I dated introduced me to curried instant noodles. It was his favourite after-school meal to make: curry-flavoured instant ramen noodles and a beaten egg was his idea of paradise. To this day, I cannot eat curried noodles without thinking of him.

My first serious relationship was with a young man whom I met in the early years of being an undergraduate at university. He loved Indomie – Indonesian instant noodles which would be drained and then covered in a sweet soy sauce (kecap manis) and chilli powder. He also loved to add cooked instant ramen noodles to a tin of Campbells’ condensed soup, making a poor man’s version of creamy pasta. I would cook him fried rice, and grill chicken wings for his friends when they gathered to play card games.

As I grew older, and dated more worldly men, the food I was introduced to became increasingly complex. One very charming suitor flew me to Bangkok for the weekend and took me to some beautiful places, including a modern Thai restaurant (where he ordered me a cocktail as well as champagne), an open-air fine dining bar/restaurant on the rooftop of a skyscraper, and a Michelin-starred Italian restaurant on the bank of the Chao Praya.

It’s no surprise that the man I ended up with for nearly ten years was a serious foodie. Together, we ate our way through Singapore, Sydney, New York, San Francisco, London, Paris, and Rome. With him, I have been to many of the world’s finest restaurants, and sampled the most interesting and inventive fare from some rather famous chefs. We watched several seasons of Masterchef, and threw uncountable memorable dinner parties at our home.

After the end of that long relationship, I casually dated for some months. Over a meal of fish head curry in Singapore, my date, a chef who hailed from New York, asked me to name my favourite restaurant in NYC. ‘____’, I’d replied. It turned out that he had been working in the kitchen there, possibly on the occasions I’d dined there. A man I hadn’t even met yet then had cooked for me – and to me that was somehow more intimate, more fortuitous, than the fact that we were on a date at all.

Back in Sydney, I went on a couple of dates with an Englishman, but my interest waned when I realised that the man didn’t bother to eat dinner, because he thought it wasn’t necessary. What could we possibly have in common? A couple of friends then set me up with a mutual friend of theirs, whom I liked instantly, and connected with deeply over a Chinese meal. He told me that he had spent the last couple of weeks helping out in his friend’s dad’s Chinese restaurant in Canberra, and showed me his hands, raw from peeling vegetables all day in the kitchen.

Eventually, I met my partner, C. Our initial conversations were not about food. In fact, I tried to pretend that I didn’t know how to cook, but he didn’t believe me for an instant. We established early on that he was a huge fan of chilli, which I cannot do without. We don’t have the money to eat out all the time, much less at fine dining establishments, but it doesn’t really matter – we cook five or six nights a week, and nearly every meal we create is gourmet, by our (high) standards. We both like all the same food, which is nearly everything that is not fast food. We both believe in making simple food from fresh ingredients. C has skills that I don’t, such as making pastry and bread, and the best béchamel sauce I have ever tasted. I have more time to shop and dream up recipes. Our greatest joy is in cooking together, and in consuming the results of our shared labour. You learn so much about someone by cooking alongside them, by watching the way they think, plan and work, by how they eat, and how they share cleaning up duties (the man is an obsessive cleaner, as I am).

I don’t write a food blog, or post reviews of restaurants, but food comes through in so much of my poetry; it forms the background to so much of my work. Food, for me, is representative of family, culture, nourishment and love. I’ve learned how to cook from my grandmother, my mother, my friends’ mothers, and my partners over the years. The dishes I prepare are a palimpsestic manifestation of experiences and cultures, new and old. It’s not good manners to kiss and tell, but no one said anything about not eating and telling.