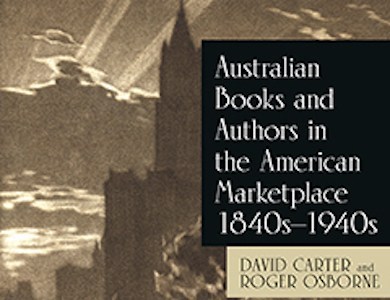 David Carter and Roger Osborne’s volume looks at publishing history as a form of literary history. The authors’ proficiency in the archive and their thoroughness of research tells a story of both the splendors and, far more, the miseries of the reception of Australian books in the United States,

The book is like a detective story (appropriately, the authors mention mystery writers Fergus Hume and Arthur Upfield as major Australian exports). Carter and Osborne are on the trail of why Australian books have not done well in the US, and, when they have done well, why that success was never made institutional. The book is chock-full of intriguing facts which could either be vital leads or red herrings depending on the reader’s predilections, but which are all tantalising. Their appeal is buttressed by many color and black and white reproductions of book covers and, most intriguingly, advertisements in American papers which are often fascinating documents of cultural evidence. Though the authors do not identify any suspects, they do delineate the contours of the mystery. In 1891, copyright extended to both British and American spheres, and the definition of publishing space was at times as liminal as it became once again in digital culture. The authors show how Rolf Boldrewood’s publication by a Macmillan firm on its way to splitting into British and American companies “make it difficult to say” (41) whether the books were British or American. Yet Boldrewood’s death was “noted in the New York papers” (47) and a Minnesota newspaper reviewer felt familiar enough with the fiction of Ada Cambridge to say that Materfamilias was above her “usual level” (36).

The authors make clear that most Australian books arrived in America “via London” (27) and, frontier affinities between the two countries aside, the relationship has to be understood in trilateral space, which oscillated from cosmopolitanism on the one hand to Anglo-Saxon racialism on the other. An intriguing instance of this trilateral space is that the Australian novelist Louis Becke, during his brief fling of fame in England in the nineteen-aughts, was asked to write an introduction to a London edition of Melville’s Moby-Dick, a Pacific novel that was not yet revived in America. Another is that Michael Innes (J.I.M. Stewart), famous for saying he could not lecture about Australian literature so would speak on Lawrence’s Kangaroo, was perceived in America as an Australian writer given the Australian and South Pacific settings of some of his early mysteries.

The authors cite Pascale Casanova on peripheral places poor in “literary resources and literary capital” (10) and suggest this is why Australia has suffered in the US literary marketplace. Yet Australia produced writing of excellent quality. The American sphere simply had difficulty sorting it out. Thus the uncertainty among US reviewers as to whether, as in the case of Norman Lindsay, Australian writers were to be scorned for lacking any “distinctive national traits” (145) or conversely dismissed as too Australian. Yet, weirdly, material so obdurately Australian as to be difficult, such as C.J. Dennis’s Doreen and the Sentimental Bloke, actually experienced “some success” (116) before subsiding into obscurity.

In the second period, the 1930s and 1940s, publication and positive accolades for Australian books did not precipitate any “recognition … of Australian literature” (149). The lavish newspaper advertisement for Henry Handel Richardson’s Ultima Thule did not even mention that she was Australian. And this was the core of the problem, as individual books had no frame of reference in which to be understood. Thus the fate of the University of Chicago Press 1948 edition of Joseph Furphy’s Such Is Life. Thefirm put maximum effort in terms of marketing, commissioning a sensitive reader’s report from the Scottish critic David Daiches and enlisting the first US Australianist, C. Hartley Grattan, to do high-level promotion of it. But by understanding the novel as “a semi-fictional account of frontier life and early socialism” (337), the potential link to modernism and experimentation was lost. Furphy’s book was denounced for lacking “universality of language” and received a complimentary review only from the Communist Daily Worker.

This episode gives some other hints as to why Australian literature did not take off in the American 1940s, even though Eleanor Dark, Patrick White, and Christina Stead all received prominent American coverage during that period, and Henry Handel Richardson was well appreciated as “one of the major English-language novelists of the era” (227). The brief American interest in Australia in that decade was centered not just in the wartime alliance but the New Deal, with an interest in Australia as a New World, egalitarian venue. As highbrow critics such as Lionel Trilling (whose wife Diana—not “Diane” as is said twice in the book and in the index—reviewed Christina Stead) took power away from more vernacular figures such as Henry Seidel Canby, the egalitarian aspects of Australian literature were no longer assets. More broadly, Australian literature did not qualify as modernist. Though Orin Borsten (later a Hollywood scriptwriter), reviewing Eleanor Dark’s Waterway for the Atlanta Journal, was “unusually perceptive” (164) in recognising the book’s modernism, the reviewer of Dark’s The Little Company for the Chicago Daily News said it lacked the refinement of a Virginia Woolf. Australian books were not “let into” modernism despite the fact some Australian books were in fact modernist. Australian fiction had risen to American prominence, as Carter and Osborne state, in association with the saga novels of British writers such as Arnold Bennett and John Galsworthy. As the reputation of these writers sagged under a more restrictive canonicity, the window for Australian writers closed; even if Eleanor Dark, not to mention Stead or White, was far more modernist than Bennett or Galsworthy.

Another tentative solution to the mystery conjured by Carter and Osborne is the Cold War. McCarthyism surely hurt the possibilities not just for Christina Stead but Kylie Tennant and Jean Devanny, yet Australian writing was viewed as far away from the urgencies of the Cold War. To compensate, Australian literature in this period had to operate not just in trilateral but in quadrilateral space, with the Soviet Union as the fourth country. Thus Stead’s fiction was championed by Stanley Burnshaw, whose leftism, like Stead’s, was personal and complex. But it is safe to say that if there had been no Soviet Union, Burnshaw and Stead would have never met. In this respect, Ben Huebsch’s confidence in Patrick White was more intrinsic, buttressed by “the force of White’s writing” (206). Whatever the solution to the mystery the authors pose, Carter and Osborne should be lauded for employing publishing history to pose intriguing questions.