“The Universe is made of stories, not of atoms.” 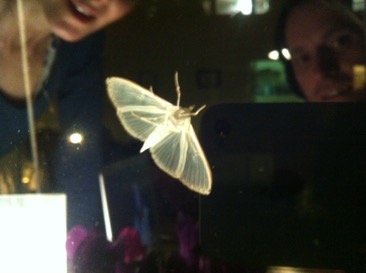 All we are is stories, and the telling of them, the hearing and writing of them. Stories fill the whole world, and all of our existences. They overlap and jostle each other, pushing in and out of our view. They are like clouds of moths flying around a light in the darkness. Only a few are illuminated at a time, and those that are are wondrous, we think, and fascinating, but we don’t know that a more wondrous one might not be flying in the shadows just out of sight. Every story is surrounded by others, in a great interconnected mass, some in the light, some invisible, and it is often the ones in darkness that are as interesting, or even more so, than those we can easily see. This is the story of the story that gave me the idea for my first novel.

At 23 Spinoza Street, Tel Aviv, is an apartment that for years housed the greatest of literary mysteries. Inside this unassuming residence, along with an old woman and a clutter of between forty and one hundred cats, was a series of cardboard boxes containing the lost manuscripts of Franz Kafka.

The Spinoza Street apartment was the home of the elderly and reclusive Eva Hoffe, one of the daughters of Max Brod’s secretary, Esther Hoffe. Max Brod was Franz Kafka’s literary executor who famously defied Kafka’s deathbed instruction to burn all of his manuscripts. Instead of destroying them, Brod published most of what we know of Kafka’s work, and it is only thanks to Brod that we have masterpieces like The Trial, The Castle and Amerika.

Brod published these three novels in Prague in the years immediately following Kafka’s death in 1924. When war broke out in 1939, Brod fled Prague for Palestine, taking Kafka’s manuscripts with him, stuffed in a suitcase. Brod went on to publish more of Kafka’s work from Israel, but many of the documents in his suitcase remained unseen. On his own death, Brod passed the manuscripts on to his secretary, and presumed lover, Esther Hoffe, who transferred the papers to various safe-deposit boxes in Zurich and Tel Aviv. In 1988 she caused a scandal by auctioning the manuscript of The Trial for almost two million dollars to the German Literature Archive. As Philip Roth noted at the time, this was a controversial and Kafkaesque move considering that not only was Kafka not German, but that his three sisters died in the Nazi concentration camps.

When Esther died in 2007, she bequeathed the Kafka papers to her two daughters, Eva Hoffe and Ruth Wiesler, but her will was challenged by the Israeli National Library. The Library claimed that Brod did not intend for the papers to be anyone’s private property, but the sisters claimed that the papers were intended to be a gift: free for them to do with as they liked. The trial that ensued was Kafkaesque to say the least.

In fact, there were more than a few parallels between the trial and Kafka’s The Trial and The Castle. Like the castle at the centre of Kafka’s novel, the papers around which the trial revolved were not only inaccessible, but seemed also to mysteriously recede at attempts to get closer. No one knew for certain what was in the collection of papers. The sisters refused to grant anyone access, and orders for them to do so were thwarted at every stage by actions that were either ridiculously bungling or the work of legal masterminds. At one point they even made the suggestion of auctioning the papers, unread, by the kilo to anyone that could afford them.

The profusion of lawyers in the case also resembled the situation in The Trial, in which Josef K. meets another defendant who has the seemingly excessive number of six lawyers representing him. When asked about this high number the defendant responds with a doleful: “I need them all.” The parties in the Kafka seem to share this need: here there were a total of seventeen lawyers, four of whom represented the two sisters.

The trial dragged on for years, full of every imaginable kind of appeal and delay, but it was in the end decided in favour of the Israeli National Library, who plan to make the papers available to the public.

I first read about this trial in Elif Batuman’s fantastic article “Kafka’s Last Trial” in The New York Times Magazine, and was instantly captivated by the idea. When I read the article, I didn’t know a great deal about Kafka, I had read a few of his stories but that was all. Reading Batuman’s article, I was struck by how much the public image of Kafka had been overshadowed by the bleakness his stories. We tend to think of Kafka as a depressing fellow, tubercular, neurotic. But I was surprised to find that in fact he was a very different kind of man. He was tall, quite handsome, and known for his sense of humour. He was obsessed with his looks, and health and fitness. He was a devotee of the Müller technique: an early-20th century exercise craze, a bit like calisthenics. He was successful at his job in accident insurance, where he invented a number of safety devices for factory workers to prevent injuries, and is even credited for inventing the civilian safety helmet.[i]

I was even more surprised to find a similar reversal of man and image when I read a bit more about Max Brod. The public image of Brod is of a successful, confident figure, handsome in the photographs of him and an influential member of the arts community in both Prague and Israel. However, I discovered that he was plagued by a severe physical deformity of the spine, for which he had worn a full-body brace for years at a time in his childhood, but even this had not stopped him from developing a hunchback later in life.

This reversal of images and identities of the two men caught my attention, especially considering how much control Brod had over Kafka’s image and legacy. Almost all of Kafka’s work we only know through Brod: as well as publishing Kafka’s work posthumously, Brod in some cases edited, and at times even completed Kafka’s manuscripts.

I became interested in the relationship between the two men. I knew that Brod had acted as Kafka’s mentor and patron, but Brod himself was a writer: how must he have felt about the genius of Kafka’s work? Surely even the most saintly among us would hear that devil’s voice of jealously in our ear when presented with someone whose greatness will simply erase us from the literary map. And how much worse such a rival would be when he is gifted with charm and good looks, as well as exceptional talent.

At the time of writing The Lost Pages, the trial was still in process, and no one knew what the Kafka papers contained. There were rumours that the papers might yield a memoir of Max Brod, and my novel imagines such a memoir from the time when Brod first encountered Kafka, and tells the story of their rivalry. Like all stories, the novel is a mixture of fact and fiction. But just because something is fiction, and imaginary, doesn’t always mean that it could not also, in some way, be true.