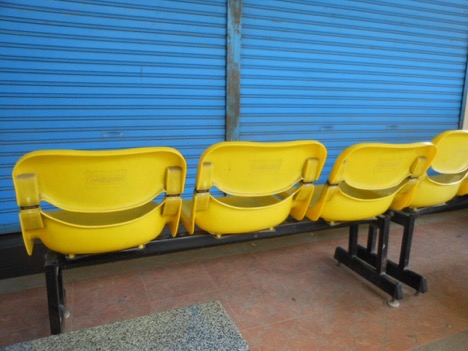 ‘In conversation’ is the lie I tell myself to get to a venue where I’ll talk about writing.

From there, a writerly discussion event is just projecting some tight-packed, thought-out writerly version of myself at someone else and a smattering of people who watch on.

I think: ‘Don’t look at them. Probably shouldn’t look at them.’ I also think: ‘Chin up, gut in. Surely you know what you’re talking about.’ I think: ‘On brand.’ When was the last time anyone had a real conversation at a forty-five degree angle, where all participants mutually faced a fourth wall?

Talking about writing formally is a simulation, genuine or disingenuous.

It’s a veneer we don’t peel or peek through often enough. Such events should be approached with a hearty, receptive skepticism, by talker and listener alike. If we can muster the gall (and, if I’m honest, the pretension), we should acknowledge that public talking about writing is only performance. If we do, we are free to enjoy the gooey pleasure that’s in the simulation.

No pressure for authenticity, or genius, or total clarity. Playground games. A daydream. Tinder. An RPG. Theatre! Insight!

I have an object and an anecdote to get us rolling. It’s common to start conversations about writing with observations about something else. Who can bear to talk just about writing? Certainly not writers who are asked to.

Object. I own this aspirational folio, with two grimy hand prints. The nervous grip-shadows are more obvious because of its yellow cover. It has dividers. One divider, tellingly marked ‘!!!’, collates some haphazard notes pulled together for talking about writing. Like many aspirational stationery products, the first notes are careful, the next are neat and the rest is a descent into something that’s either a sentence or a pen test.

Its first page compiled research on the interviewer, other authors in the field, current events and other assorted bites. It would be nostalgic and charming if I don’t remember that interview being a glottal-spoken incoherent glob in which I earnestly lyricised ‘the void’. The last page, which reminds me that I’ll need to archive or bin these pages soon, reads ‘language, blak stuff’. Helpful!

Anecdote. Against all the odds, my favourite simulated yarn so far was one about poetry during Melbourne’s Emerging Writers’ Festival. Because of a dodgy pea soup, the panel was bookended by a preventative puke before and a desperate dash to the loo after. My yellow friend took me to both.

I went into a soft focus to get through the hour. So, no reading, which also meant no notes. A gracious chair, a keen and tender audience, and expert, generous co-panellists smoothed the way on my gastro-poetic journey from green vomit into verdant fields of simulated chatting. Small mercies.

Pea soup barred from my body indefinitely, and Perth Writers’ Festival looming around the corner, I want to informally, imperfectly reflect on some things that make a decent simulated yarn about writing. I’ve no wealth of experience, and more face-plants than triumphs. Is this good or bad for the purposes of reflection? I’m not sure.

‘I’m not sure.’ A brilliant segue. Mercifully ambiguous, hint of nuance.

Of course, the smattering of heads beyond the threshold is the threshold: they must be there to make the event an event. The audience is crucial outside of their obvious role, too.

If they are open and receptive, the simulation is smoother. At their worst, they are condescending or disengaged. Their questions, mostly outside of what has been curated, take conversations to dense, chewy places. This is especially the case when the audience is made up of people outside, or on the margins of, Australian literature.

Audiences can also restrain you. I have yarned before groups of listeners that are almost entirely Anglo-Saxon. Between a discussion on Aboriginal knowledge and writing that was interrupted by white audience members asking me questions about a documentary both they and I had never seen, to a woman in the front row who openly gawked and looked me up and down when I was introduced as an Aboriginal poet, the experience places me in a defensive or informative position from its beginning. Although homogenous audiences are not always so unnerving, they still subtly keep discussion on a narrower path that must set its own foundation where it can’t rely on a common ground of knowledge.

The listener can also bleed into the role of the speaker. Last year, I was on a panel (for ‘language, blak stuff’) that sat under a thick-set tree in a garden. Listeners sat on the ground, close. About half an hour in, the thing dissolved. Audience members shared anecdotes, asked one another questions. Our role, happily turned inside out, was to observe, question and relate. No less a simulation (everyone was publicly signalling something), but that event crept closer to a yarn in its reciprocal form. I don’t think it was a coincidence that this event was on a specific pretext: on how to know, and on who knows. The listeners knew.

Recently, we’ve seen a revival in writing programming for women writers. That revival is especially insistent that women are given space to speak about more than writing while women. While it is valuable to talk about marginalisation, continually justifying their presence and being on the writing scene makes for discussion and intellectual labour whose performance can be patronising, devalued, and detract from their substantive work. Other groups have not yet been afforded the same; we are wedged in the nondescript push for ‘diversity’, which seems to take us in the opposite direction.

My first ‘writing while Indigenous’ event was a thrill; by the fourth even the simulation felt forced and the act of speaking and being heard felt more like being in a zoo. While I spoke about the basics of Aboriginal identity (again), somewhere in an adjacent event someone else could talk about their work, their form, their matter. All of these not afforded to me.

So many marginal writers, writers of colour especially, are offered this talk: the being of a diverse writer, never the doing of writing.

This is not to discourage community-specific events; exactly the opposite! The conversation of diversity must mature, and take us in braver directions. Minority writers can simulate more than their ‘otherness’. Programs must be diverse beyond an aesthetic smattering of participants. We need a diversity that’s reflected in the ways writing events do and are and opens up space for minorities to do and be.

Although this seems like an improbable goal, it can be done well. And when it’s done, it sings like a glass being filled.

Queensland Poetry Festival made Indigenous poetry its centre. Its simulated conversations, performances, talks over sandwiches, and a spirit of reciprocity between poet and audience, flowed forth from that.

Events assembled by Indigenous organisations, in my experience, are the same. At Perth Writers’ Festival, I will yarn with Bruce Pascoe and Jared Thomas about storywork, challenging assumptions, and the shifting publication base of Indigenous authors. A knowledge and perspective cluster to cling to, rather than expectations that we will attract some diverse exotic thrill. This kind of diversity takes a higher path: away from being known, and towards being knowers.

Last year’s Brisbane Writers’ Festival illustrated clearly that events hinge on a writer who turns up in good faith and with critical self-reflection. The keynote of the festival derided calls to ameliorate racism and cultural appropriation in literature. Writers of colour responded with new and familiar forms of discussion, uncurated, in online and physical spaces. These were simulated public conversations about conversation, made anew in response to power and marginalisation that were supplemented by community discussions about what it means to talk about writing. Ultimately, the response enriched public knowledge about racism in literature, but it troubled the hands of those writers who bore the public discussion.

As commentary and broadcasting of writing events seep into the online and into uncurated territories, expect tumult. Expect barriers to be dented between listener and talker, between private and public discussion, and between the margin of Australian literature and its centre.

It is an hour on the stage that is chockers with insight and stumbling blocks in equal parts, and it’s an honour to stumble around on it this weekend for Perth Writers’ Festival.

That’s all we have time for this evening. Please join me in thanking our guests.