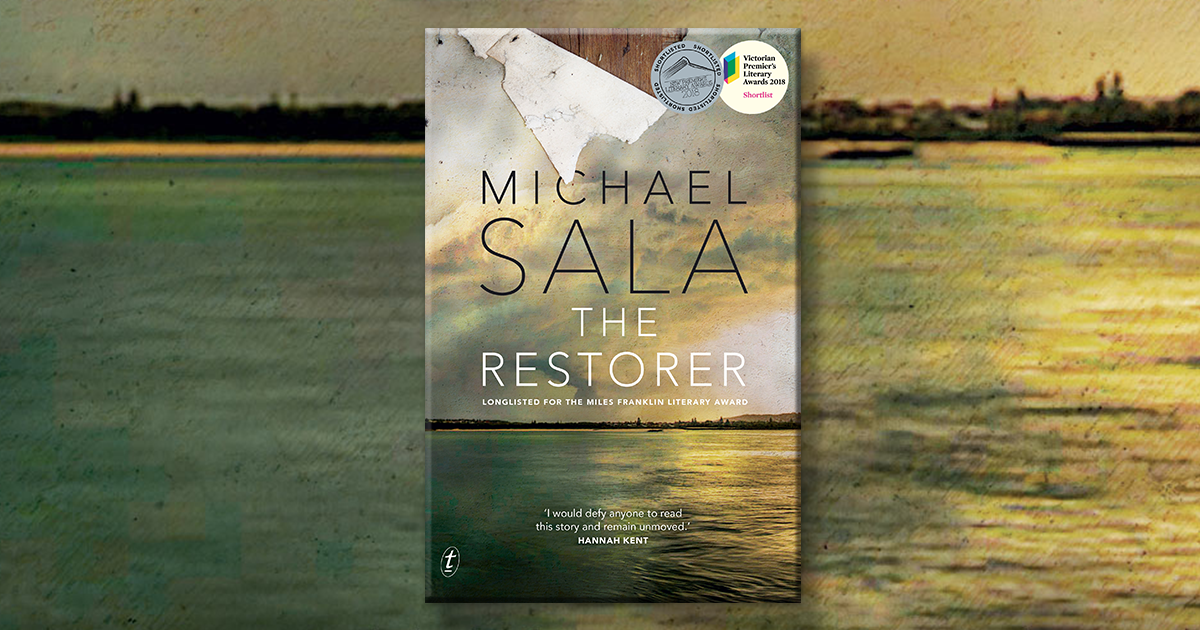 Since the earthquake, the whole town felt as if it were being dismantled rather than put back together – like their house, like everything – (298)

Michael Sala’s The Restorer weaves together the experiences of a family attempting to restore its balance following a year of separation from Roy: the husband, father, and threatening patriarch of the household. The novel is full of doublings – layers of attempted restorations and new beginnings, patterns of relationships and the potential for repeated violence and tremors.

Set in 1989 in Newcastle, the end point is in sight from the beginning – the shocking earthquake that hit on December 28, killing 13 and causing billions of dollars of damage to the community. The inevitability of this event is heightened by descriptions of the restoration of the house, an already weakened structure slowly being repaired. The dramatic irony of the impending rupture sets up the family’s activities as unsettlingly futile. As Roy comes closer and closer to finishing his work on the building, we become more and more aware that the work will have been in vain.

Sala doubles the threat against both house and family by littering the novel with images of tunnels burrowing under the city. Yet the inhabitants of Newcastle “just take it for granted that the ground is solid” (121), as though their lack of knowledge about their own landscape will be their final undoing. Emblematic of Sala’s unrelenting layering of tension, he suggests the land is rendered even weaker by yet another natural force: the sea, which has the potential to flood the tunnels and pull the city in on itself.

In this landscape, we meet 14-year-old-Freya, her mother Maryanne, younger brother Daniel and father, Roy, as they move into an abandoned house: its history dark and future as uncertain as the family’s own.  As Freya approaches the house for the first time, she feels this history and decay, “It smelled of old fire – a sharp, cloying tang of burnt wood and chemical and plastic – and underneath that, rotting wood, urine, things long since dead” (7).

The tension between Maryanne and Roy is palpable from the first pages and it is clear Roy is attempting to redeem himself for something, though he resents this need. At times this tension feels too overt, the impending violence signposted too frequently:

“What’s that light?” Mum asked.
“A warning,” Dad said, holding her hand. “For the ships. As they’re coming in. So they know where they’re going and don’t run into trouble.” He gave her a sidelong glance. “A bit like you and me.” (34)

Though these moments are recurrent, they are generally juxtaposed with quiet moments, so that the implication of violence hums below the surface, just enough to keep us on edge in another otherwise sleepy environment. Even as Maryanne reminisces on her history with Roy, and her love for him, the descriptions are tinged with danger, “His hand on her throat, his mouth against her lips, his eyes” (127). While their sexual attraction is palpable, it is also brutal, and his jealous nature pervades every act. While the continual signposting is arguably tedious at times, it is also the essence of where the drama comes from – the need to turn the page and witness to inevitable rupture ahead.

This parental relationship is mimicked by 14-year-old Freya’s relationships with her schoolmate Josh and a young man, Tim. While she befriends the sweet though rebellious Josh, he has jealous tendencies that mimic her father’s behaviour. When we meet the older, sexier dominance of Tim, Freya’s attraction to him – despite the warnings – resembles her own parent’s fraught relationship.

Outside these doublings, The Restorer becomes a coming of age narrative for Freya and a period of self-discovery and strengthening for Maryanne. While Maryanne managed to leave Roy once before (when his violence left Daniel hospitalised), she is timid in relation to him, fearful of his moods, showing a heightened awareness of the physicality of his body at all times. However, as she begins to find fulfilment in her job as a nurse, there is an increasing sense that this new city, the house, the environment itself, is somehow giving Maryanne the perspective needed to envisage a safer life away from Roy. She maintains intermittent, and somewhat forbidden, contact with her mother in Sydney, and despite the tension in their relationship there is an implication that a safe haven would be possible.

Later we learn that the pattern of abusive relationships is inter-generational as Maryanne questions her mother, who failed to protect her against her own father’s beatings. Her mother dismisses the violence with “Things are different now” (275), causing us to ask if that is in fact true – for 1989 or even today. It seems Maryanne is concerned about the cycle continuing with Freya, as she questions her about boys and the possibility that she could be taking drugs. Freya, however is more aware then her mother gives her credit for and replies “Is that how you ended up with Dad? What crazy drug were you on to end up with him?” (227), reminding us that Roy’s past violence is far from forgiven.

The night after the earthquake rips through the city, Freya sees her mother returning from treating the victims at the hospital and is hardened by Maryanne and Roy’s arguing, once again. Avoiding their gaze, she sneaks out to attend a beach party that, on the surface, is reminiscent of the idealistic imagery of a Californian childhood. There, drunk, she ignores the doting Josh and instead turns her attentions to the predatory Tim. It seems that despite her disgust at her mother’s return to Roy, Freya herself may continue the cycle of submitting to abusive relationships. Yet Sala grants us a moment of hope as she changes her mind and escapes from the abuse that seems almost inevitable.

At this point, Sala reminds us of the importance of the place. Freya walks home through the dismantled town, spotting now familiar landmarks, “Everything she saw held some memory now, and maybe that was all there was to a place, the memories that started to fill it so that it became yours, even if you didn’t want it” (326).

It is not insignificant then, that while Freya is out, it is the house and the environment around Maryanne that urges her to fight back and finally tell Roy she’s leaving: “She felt exhausted, alive, terribly alive, and the hallway, the house, the whole world was leaning in towards her, daring her to say it.” (317). It is an empowerment of Maryanne, however, this final burst of confidence is her undoing.

In the fallout of this argument we witness Freya’s maturity come to fruition. There is a bitter-sweet quality to the conclusion, as both Maryanne and Freya come into their own, but lose everything in the process. There is a sense that the restoration of the house and the family were inevitably futile, yet through these failings the inter-generational cycle of violence has been broken at last.

Sala’s voice throughout is consistent and the tone continually heightens the sense of the landscape. Like much Australian fiction, the natural violence of the location – in this case the earthquake and the sea – is a crucial force that heightens the threat to the character’s survival, both emotionally and physically. It is this sense of place that binds the narratives within The Restorer, and provides the reader with a framework through which we can process the true trauma of the brutal domestic violence underpinning the narrative.