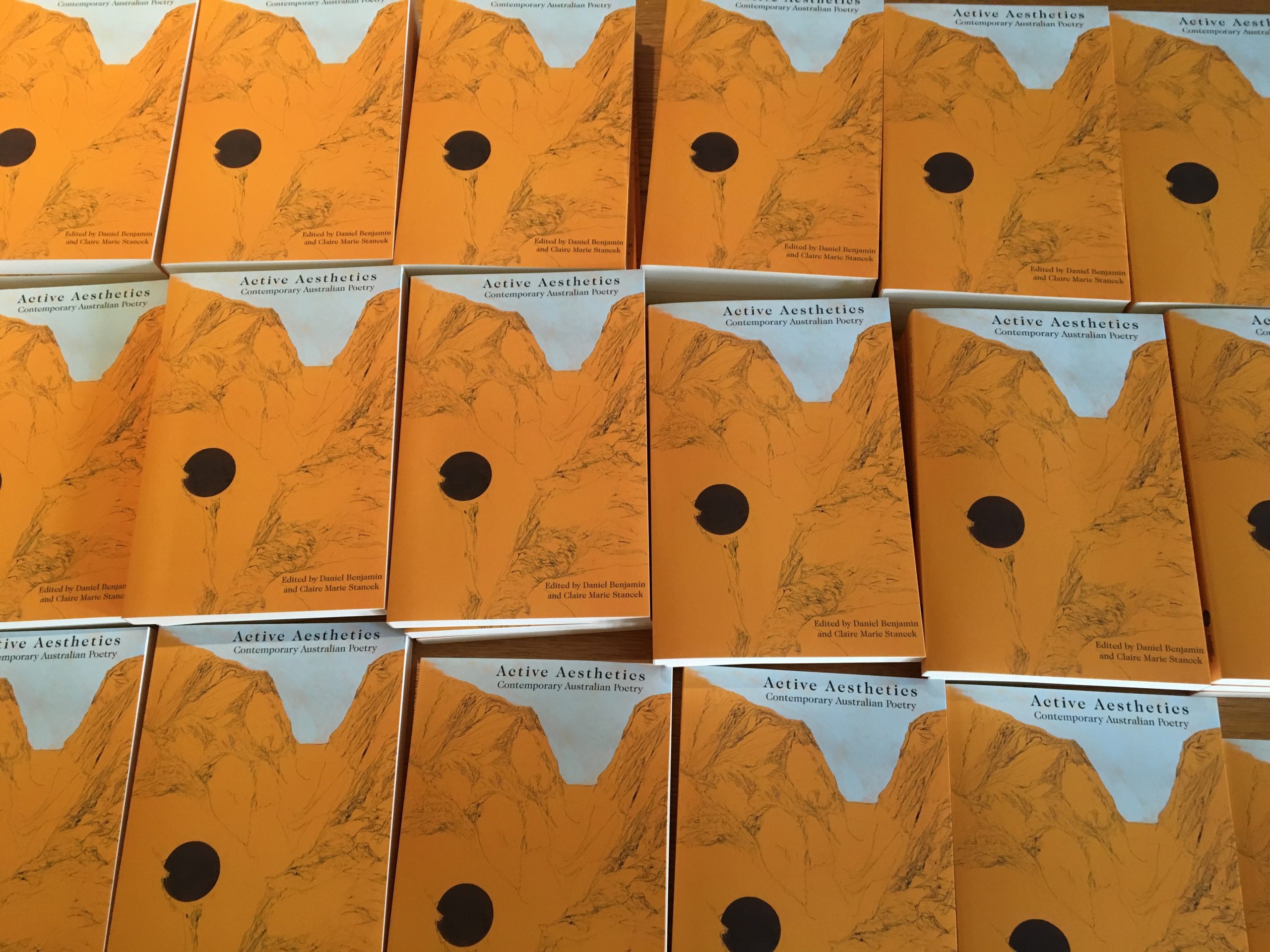 The day before I crossed the Pacific for Active Aesthetics a new book arrived by post from Berkeley. There it was – The Unfollowing by Lyn Hejinian – a handsome suite of elegiac poems, not quite sonnets, with a bold cover design by Sofie Ramos. I was still packing my bags and wondering how on earth three dozen Australian poets would make it to Berkeley, restless with last minute visions and lists. The Unfollowing was a perfect accident: exactly itself, a periapt. I couldn’t bear to set aside its clear lines and improvised walks of thought. I comically ferried it back to Berkeley in my luggage to read on the plane home.

I’ve been following and unfollowing Lyn Hejinian’s poetry for half my life. Lyn first visited Australia twenty years ago, giving a reading at Gleebooks in Sydney on Kate Lilley’s invitation. I remember listening to Lyn’s poems under a dusty ventilation fan and admiring their precise music. I also remember a slow immersion into a radical sense of purpose: here were ideas and aesthetic forms I barely understood, but needed to understand. Was I following Lyn’s reading? What might track from such stellar bundles of cognition? How did these lines chime with local Australian poetics? It was impossible to say. But, electrified by things I couldn’t follow, I decided to write a doctoral thesis on Lyn Hejinian. “Our fates” are always hidden, Lyn reminds us in The Unfollowing, no matter how diligently we try to imagine them.

Two years later I found myself on a BART train zooming under San Francisco Bay to meet Lyn. She had emailed directions to a station where she would collect me. I’ll never forget one piece of advice in that letter: “I will be carrying a large book.” My mind reeled with images of the BART station as a kind of super-conductor, teeming with people. I would be swept along in the apparition of faces (petals on a wet, black bough)[ii] while searching for a famous poet last seen in Glebe. She would be carrying a large book. We paused at the station and I catapulted onto the platform. It was utterly deserted – save for Lyn standing by the turnstiles in sunglasses holding a copy of Poetics Journal Number 10. We talked about parallax in the car. Later I listened to Lyn speak about poetical enquiries and histories at her dining room table and gave her a blown emu egg. We’ve been friends ever since.

Lyn Hejinian writes in The Book of a Thousand Eyes: “I will think about this later, afterwards / The thought will be long, it will wind through ten events”.[iii] I think The Book of a Thousand Eyes is Lyn’s major work of the past decade. Over several hundred pages the serial poem tells story after story “in homage to Scheherazade”[iv], compiling an allegorical and encyclopedic survey of wakefulness and sleeping. Night on our faces (for we have many) hides from us (there are many of us). In writing these four brief posts on Active Aesthetics for Southerly, I’ve been aware of a thousand alternate stories and days hovering like a soundtrack behind my screen. Some are “lost to history”[v] while others are “piled / into chairs along / with catalogues”[vi]. Writing retrieves and reconstructs scenes of happening, such that memories are sketched both exactly (on the continuous slopes of mathematical ferns) and provisionally (left with an impression) ­– a contradictory impulse that occurs “over and over”:

I’ve reflected often on how best to follow the gifts of optimism and camaraderie shared with countless Australian poets in Berkeley last April by so many American friends. Key riffs have drifted into focus while others are still taking shape. One particular story from Active Aesthetics continues to resonate, exact and meaningful. Contemporary Australian poetry owes a great debt of gratitude to Lyn Hejinian. It was staggeringly generous of U. C. Berkeley to welcome and support the visit of so many Australian poets, and to enable a series of acute conversations about poetics, aesthetic work, politics and culture. To recall Lyn’s preface in The Unfollowing, such transnational and border-crossing occasions for thinking and making art are “an attribute of a revolutionary practice of everyday life, dismantling control and reforming connectivity”[viii].

Many sorts of control were dismantled gently at Active Aesthetics. Readings happily overspilled the dictates of time and program. Stories of cultural power were scrutinised and remade. Identities were sifted into new coherence. Audio equipment returned accidental silences. Books were lost and found. While giving my paper I cried unpredictably, undone by fatigue and gravity. The whole conference was critical, rich and highly charged – an experience of serious, poetical sociability and total connectivity.

Whenever stories start to spool uncontained in my head I begin to list. Listing is reassuring in its sheer contingency and temporary truthfulness. I want to close these meditations on Active Aesthetics with a few lists – not to end, but to honour the labours and commitments of almost a hundred people who made remarkable things happen in Berkeley and San Francisco, from which a thousand more will follow.

Heartfelt thanks to the astounding and matchless double act of Professor Lyn Hejinian and Associate Professor Eric Falci. Thanks to our inspired and zeitgeisty Australian co-convenor Ann Vickery. Thank you to the courageously intelligent crew of Daniel Benjamin, Claire Marie Stancek and Serena Le. Thank you to Muwekma Ohlone community leader Vincent Medina and to Professor Hertha Sweet Wong. Thanks to Tuumba Press and especially Derek Fenner for such a beautiful celebratory anthology and to Lyn Hejinian, Sofie Ramos, Kent MacCarter and Cordite Poetry Review for the companion special feature on Bay Area poetics. Thank you to Clare Milledge and The Commercial Gallery for permission to use Clare’s stunning artwork. Thanks to all the enthusiastic and brilliant panel chairs, students, listeners and speakers who came to Active Aesthetics and joined the dialogue.

Sincere thanks to staff of the Department of English and associated Research Centres of the University of California, Berkeley; the San Francisco Center for New Music; the School of Humanities and Communication Arts at Western Sydney University; the Writing and Society Research Centre at WSU; the Office of the Deputy Vice-Chancellor (Research and Development) at WSU; and the School of Communication and Creative Arts at Deakin University. [ii] This experience is ghosted of course by Ezra Pound’s ‘In a Station of the Metro’.