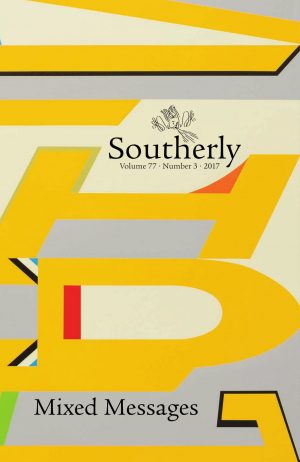 The theme of this issue, Mixed Messages, relates in the main to a thread running through the essays, all of which engage with texts that challenge the limits of genre. These challenges include the status and influence of what might be termed a secondary genre deployed by writers whose renown is based on another form: Brigitta Olubas considers the short fiction of novelist Shirley Hazzard; and Cheryl Taylor introduces the poetry of novelist Thea Astley.

Kate Livett delves into the mixed media, specifically music and photography, at the core of Helen Garner’s The Children’s Bach, and Peter Kirkpatrick examines the fusion of Gothic and Romance forms in Chloe Hooper’s The Engagement, and David Brooks thinks through the miscenegy of the human and the non-human in relation to the famous scene of Derrida standing naked before his cat.

Another strand in the issue is of comedy and errors and includes fiction by Debra Adelaide, John Kinsella, Mark Macrossan, Sara Bucholz, Nasrin Mahoutchi, Niki Tulk and Scott McCulloch. The poetry spans its usual wide range from the lyric to graphic experimentation and the reviews introduce some of the exciting new work published across creative and critical forms.

The journal is available to purchase here | Digital edition

Chris Lynch: The Philosophy of Mangoes

Rosemary Drescher: What is the Apricot Saying?

Kristen Lang: The View from Chhampi

Bernard Cohen: In the Time it Takes to Finish a Sandwich, We Could Build Worlds