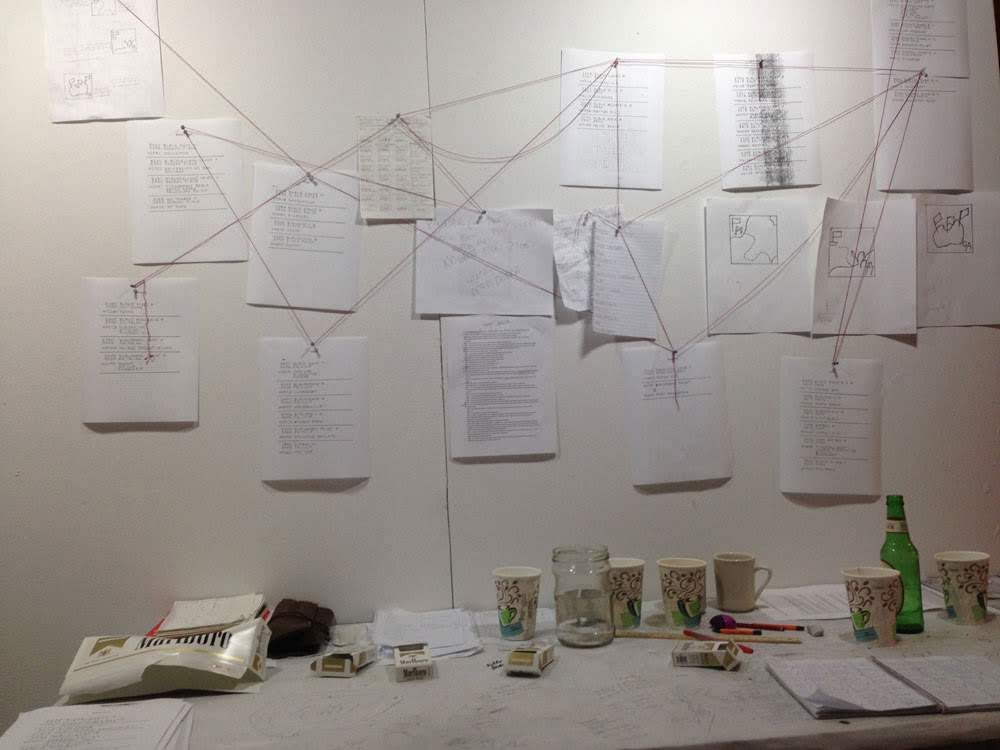 In front of the man, in fact almost all around him – scattered on the butchers papered trestle table he sits at, taped and tacked to the three dividing walls arranged in a U suggesting a room, tossed or lost to the floor – are sheets of paper: photocopied, cut and pasted, gridded, plain, scribbled, planes.

Amidst his foible’s foliage are further markers of this clichéd frame: the assorted mugs with assorted stains, the scattered packets of cigarettes, the ink spills, pencil shavings, lint left from frantic erasing, and most tellingly, the lengths of blood-red string that link the lot through a series of truckies knots and nooses round the necks of pins pushed into flimsy walls.
i
i
2640 Table Top

An ash-caked keyboard illuminated by the white light of a yet-to-be-written email. The cursor blinks. At the bottom of the body is the logo for an institution.

An email from a former student asking about my interest in writing a series of pieces to be posted on the Southerly blog through the month of October. Of course, I reply. This question prompts more questions:

What am I going to write about?

And, What was I doing (or not doing) that, when I was at a comparable point in my studies, I couldn’t fathom six degrees of Kevin Bacon from such a journal, to say nothing of being in the position to offer an opportunity that feels so necessary (for the ego, the deadline, the kick up the arse, the pay cheque) to one of my tutors?

But also, Has my musing on all this made me late for the meeting?

It had not. And following the meeting (with an honours student I would be co-supervising, my first) I had an answer for one of these questions, in the form of another: Inspired by the precise and personal collection of texts she was in the process of assembling for her thesis, could I perhaps use these pieces as an opportunity to write about the collection I was in the process of assembling?
i
i
2581 Collector

At the center of this collection was a chapbook I had found at the sadly now defunct Collected Works, in Melbourne. While the name suggests an exhaustive selection of works, entire oeuvres, complete sets (and the store no doubt stocked the complete titles of many poets), the “Collected” evoked for me something more like assorted and amassed; something more personal and subjective than the exhaustive edited collection.

There were books here, Collected Works Of… but also broadsides and pamphlets and posters and chapbooks and journals and edited collections and zines and leaflets and magazines (from the archaic to the avant-garde) and assorted other bumf. Books bound professionally but also those done by hand with paper, a printer, stapler and scissors needle and thread, covers made with typewriters, silkscreen, rubber stamps.

There to read as part of the launch of my first book (a co-launch crowded by the others’ crowd, but crowded all the same) the clock ticking and thinking it poor form to risk missing the start by sneaking another dart outside down the labyrinthine stairwell I turn instead to the equally sinuous shelves and their contents.
i
i
3448 Metcalfe

And among these was Paul Metcalf’s Zip Odes – at a little over 50 unnumbered pages a slim, paperback collection of poetry published in 1977 by Tansy Press, Lawrence, Kansas – since included in Metcalf’s three-volume Collected Works, published by Coffee House Press in 1997.

Metcalf provides an explanation of the conceptual conceit linking the poems in a brief introduction:

“The 51 poems in this collection – one for each state, and the District of Columbia – are arranged alphabetically.

They are composed entirely of place names, as they appear, state by state, in the U. S. Postal Service Zip Code Directory (1968 Edition). I have allowed myself liberty in punctuation, in placing the words on the page, in combining one or more names, and occasionally repeating a name, within a poem. However, nothing has been added – there are no “filler” words, or “combining” words.

These are our places…as they were somehow named…and as the Great Dispenser of Zips had preserved them.

4800 Pauls Pocket
i
A loose thread followed leads here and to questions like:

What would an Australian version of Metcalf’s project look like?

In what ways would it differ?

Had it already been done?

What kind of poetry was already present in postcodes, prior to any manipulation? Waiting

How might the numerical aspect of postcodes be incorporated into a poetic treatment of this lexicon?