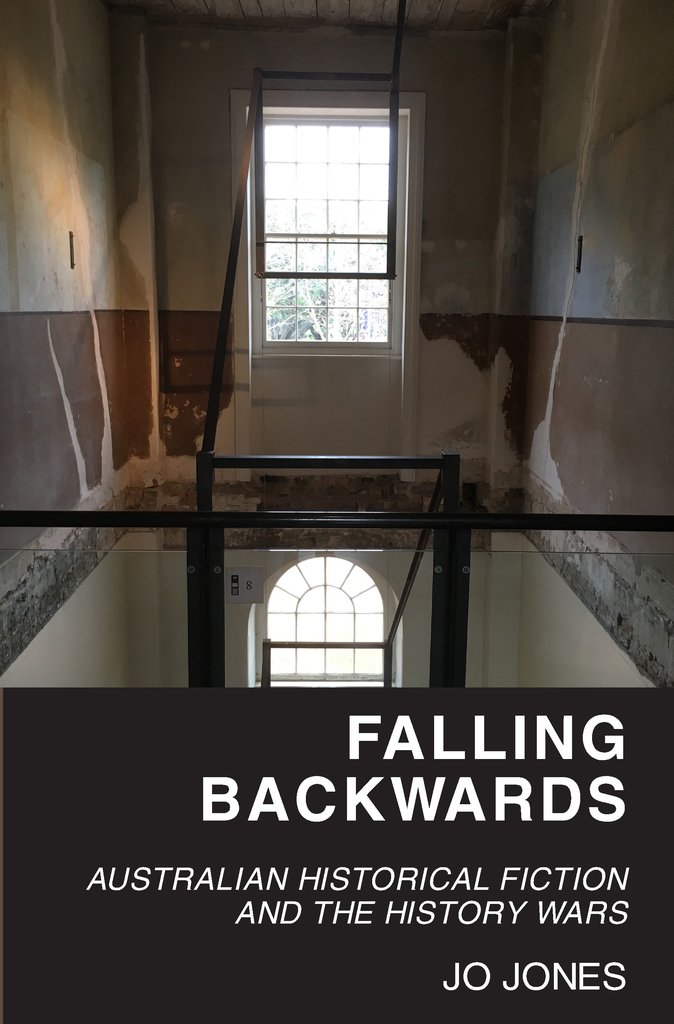 Jo Jones’s Falling Backwards is balanced on the notion that “Some stories are hard to tell.” The question of how best to engage with this trauma—how to look back, openly and sensitively, into the darkness of Australia’s colonial past—is at the heart of her volume. The titular image of falling backwards gestures towards this work’s primary insight. Falling is usually an involuntary act. Yet, in acknowledging that we must tumble loose from our present assumptions, we might open ourselves up to a productive disorientation. This process allows ideas about self and other, belonging and identity, to shift and emerge anew. Ultimately, Falling Backwards is a thoughtful analysis of the politics of literary form in contemporary historical fiction. Jones does not object to realism per se, but to the ethical compromises that can occur when this classically linear, unified and self-affirming mode is applied to the representation of a positivistically unknowable past. Conversely, her work argues the merits of a less rigid, more experimental mode of speaking when dealing with these complexities:

…the terrain of the postmodern and historical sublime—of loss and uncertainty—is one in which historical fiction can perform an important political and ethical role… The space that lies beyond history, the space of those who are often unrepresented, often victims, often silent, is an abyss into which fiction, particularly historical fiction, is sometimes able, imaginatively and also ethically, to descend. (27)

Across five highly readable chapters, Jones discusses the political and ethical implications of a range of novels written during a period of intense public and intellectual debate in Australia, a moment known as the History Wars.

Her analysis sits at a temporal remove from the crosscurrents in question. While aware that questions surrounding the representation of frontier violence continue to swirl, Falling Backwards enters the arena some ten years after the most vitriolic skirmishes of the History Wars. This volume looks back reflectively as the dust of recent years begins to settle and stances start to solidify. In 2018, publications like Jones’s Falling Backwards are vital. They ensure that the largely unresolved questions surrounding our colonial history and post-colonial present continue to be asked; that the intellectual and societal agendas enlivened by these debates do not fade into silence now that the fanfare has passed. In her introduction and conclusion, Jones discusses how, following Rudd’s 2007 National Apology, “Indigenous disadvantage has been comparatively inconspicuous in public discourse…” (5–6), and when explaining her choice of authors Flanagan, Grenville, Malouf, Scott and Hall, she comments that “each one of these novelists continues to write more historical novels…” (4). Implicit in the volume’s mission statement is a sincere effort to progress conversations around the trauma of interracial conflict as different aesthetic representations continue to proliferate. Jones approaches these novels with renewed questioning and fresh insights, striving to keep crucial dynamics in political play. For this important work, she is to be commended.

The novels dealt with are formally varied and unique ideas are unpacked with sophisticated theoretical applications. The chapters that focus on Kate Grenville and Kim Scott speak to each other with an especial poignancy, and neatly encapsulate Jones’s core argument. In her discussion of Grenville, Jones suggests that this author’s engagement with the past across three inter-related works—the deeply personal Searching for the Secret River, the novel The Secret River and her subsequent novel The Lieutenant—enact a movement of ethical “expansion and retraction” (86). Initially in her memoir,

…the complication of (Grenville’s) own identity and self-perception has led to a more sophisticated and sensitive consideration of the Other of history … Grenville’s connection to the past (in this instance) is not one of drawing wide scale conclusions, but of plunging into moments of singular lives to which, through the bonds of ancestry, she feels connected whilst knowing them to be vastly different from her own… [the process] is about the attempt to connect… in the knowledge that it is impossible to do so. (93)

The postmodern sublimity of the past—a theoretical model that Jones draws on repeatedly to conceptualise the overwhelming “abyss” of history and loss—is respected by Grenville’s memoir. The intimacy of this form allows Grenville to transparently explore her ethical disorientation and conceptual conundrums as they surface through the research process. However, in deciding to lock down her discoveries in a classically realist novel, Grenville runs into “philosophical and ethical difficulties.” These issues, Jones suggests, are

…inherent in the realist form itself, with its certainty that the human subject, in its entirety, is within the grasp of rational understanding, and that the experience of being human, whether then or now, renders fully knowable the motivations and decisions of others—a process with worrying political implications, particularly in historical fiction when the “then” and “now” are so different. (103–04)

Within her broader analysis, Jones deploys the scholarship of Edith Wyschogrod, who stipulates that the author/historian should remain visible in the work so as to acknowledge that this positionality bears on their historical interpretation. Conversely, Grenville’s realist form erases the “I” of memoir. In various ways, The Secret River formally creates “a kind of ethical lacuna, in which the distance between the ‘now’ and ‘then’ vanishes… the otherness of history is absent” (97).

In a move that many of Grenville’s early critics failed to make, Jones acknowledges the humility that Grenville has demonstrated in detailing her creative process and listening to her detractors—considering their concerns in subsequent aesthetic offerings—as well as the valuable capacity of even conventional and non-confronting literature to “bring national sensitivities to the surface in the ‘hubbub’ of discourse” (131). Ultimately, however, these aesthetics remain ethically handicapped in a way that the more innovative dynamism of Kim Scott’s Benang does not. Jones points out that the intricacies of Benang’s construction “call for more critical attention than they have so far received,” and her analysis extends Hilary Emmett’s contention that Scott’s rhizomic amalgamation of tales disrupts hierarchical power (169). Her contribution is in suggesting that the exact patterning of these narrative strands and their different stylistic modes is vitally instructive. Scott juxtaposes confronting episodes of realism—such as those that deal with rape and massacre—with a highly aesthetic evocation of the spirit of place. Delving into the contentious tangle of Indigenous identity politics and appropriate representation, Jones argues convincingly for the emergence of a distinctly Romantic mode in Scott’s work. She deploys the claims of Isobel Armstrong and complicates those of Andrew McCann, explaining how Benang’s particular evocation of genius loci, when woven into the complex fabric of Scott’s writing, does not foreclose the harsh materiality of the past (180–81), but comes to convey the resilience and strength of the Noongar people (184).

What emerges at the conclusion of this chapter and at the conclusion of Jones’s volume overall is the power of particular literary forms and formal combinations, and the problems inherent to others. Overwhelmingly, Falling Backwards leaves the reader with a strong sense of the role literature has to play in cultivating a meaningful relationship between Australia’s people and their past. Hard stories must continue to be told in innovative and thoughtful new ways.

I’m currently in the second year of my PhD studies at UNSW. My thesis looks at the mid career novels of Eleanor Dark, and is concerned with the convergence of modernism and ecopoetics in this author’s work. My current research has stemmed from a broader interest in Australian literature fostered during my undergraduate studies at UNSW.