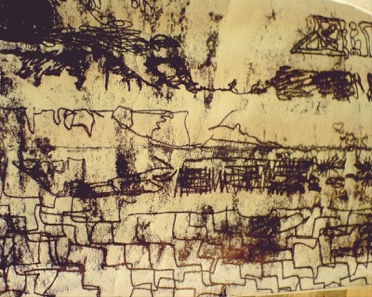 Dunno if you remember me, tid. You and me went to school together in 2005.

I’ve got these vignettes of you in my head. First we walked together on a tour of the school grounds like fluffy juvenile magpies – except it was so hot we were slick, drippy and dragging. Then, we sat at the front of English class together and didn’t speak. I remember you doodled in your corners and I anxiously marked out a margin (three centimetres; parallel to the page edge; red pen).

Year 7 is hard enough. We could have braced ourselves together. Would it have helped the hardness, the out-of-sortsness, of those first few days?

We ticked the same boxes.

Misshapen uniforms that we would grow into. Aboriginal girls. Scholarship kids – and didn’t they smell it on us! There was light contempt in the air: the two nerds in a well to do country school would be blak women. Contempt that we’d get a free ride because we (well, you) were damn smart, not, contrary to popular belief, that Indigenous people got free shit from the government. I still think they thought we got free shit, then. If only.

I’ve lost contact with you. It’s a long time, five whole new social media platforms, since 2005 when neither of us had reliable, regular internet access.  No Facebook memories, howsoever confected, to help us reminisce. Just this inane clumsy montage that comes to me sometimes, formed before our brains got scrambled like pupae in a cocoon.

I know I have put rouge and roses on my telling of this, as if that acknowledgement helps. As if I can pull apart what I want this memory to be, from what I remember it as, or from what it actually was. I can’t. Flawed recollection and all, I gotta say it.

I thought of the things I owe you especially this week as I sat on Noongar lands and talked about Indigenous publishing. It’s the most ridiculous, serendipitous thing you and I got in common, against all the odds brought together by a country school scholarship and then again by an independent book publisher, both times without talking that much.

Magabala Books turned thirty this year while you and I turned twenty-four. It meant we had the benefit of being cocooned by an Indigenous literary scene that had its own press. A knowledge stamp on the land. That was a dumb luck I’m only just understanding now. You understood its significance long before me.

In our second week of Year 7, our classes gathered in a little library enclave. You read us a book, poetry that was illustrated by Bronwyn Bancroft, The Outback (Magabala Books, 2005). As you read it, I realised with a tummy roar (or a tummy drop) that you wrote it! As a kid. As a Gomeroi kid. I was eleven, so naturally I was raging mad about it, having never even thought about even writing a book, and now bested. I had a rival, and it wasn’t the blonde archetype from the eastern suburbs I’d expected. It was you, a Gomeroi girl like me.

At the age of eleven, my eyes stung. I humiliated myself as my body betrayed my anger – I could never be the best blak at this school, a currency I so craved and one that I expected to get, having internalised generations of imposed low expectations. The worst of it all? I didn’t even know what ‘seldom’ meant. You made that word sing – of course, it’s now ruined in my mouth. It is your word. I seldom hear it without thinking of your book and you. See? Too bumbling.

A girl in our class snickered at my red face and tantrum breath – as she should. I’m glad that I didn’t stay mad for long and that you were a genius second only to being gracious, insightful and kind. We became friends – united by what we had in common and driven even closer together by what we didn’t. We liked Artemis Fowl, a series of kids’ fantasy novels about a child genius and underground fairy civilisations. I had a crush on its smarmy, titular protagonist and his bubbly blonde bodyguard, and you thought both were repulsive. We both thought of ourselves as similarly misunderstood and edgy child geniuses, so close to unlocking the secrets of the land. We both weren’t. We both ate devon sandwiches.

We didn’t talk about your book. I want you to know that I read that book in the library long after we lost touch.

No clichés – it didn’t get me through high school. What can? It got in my mouth.

I could describe and conceptualise things. Yes, thanks to you I could do that in the technical sense of using good(ish) English, but also in the sense of the Gomeroi gut we both got. I could know things – not just words like ‘seldom’, not just outbacks – us, knowledge itself.

When you’re young, like we still are, these things feel big.

When there’s one page on Aboriginal people in our history textbook – a fanfare; a capitulation; good Aborigines – that is big.

When you can see the ranks of blak students at your school – all scholarship kids; all geniuses – swell beneath you, you feel big.

I like to think now that you and me are both poets that pluck from the land and put something back. I plucked so much from you and put it in my pockets. Now, we both separately watch something be sparked, a renaissance to which we both made small contributions and whose contributors we’ll go on to make – just like you made me.

For now and for wherever you are – my tidda – thank you. I seldom take this for granted.