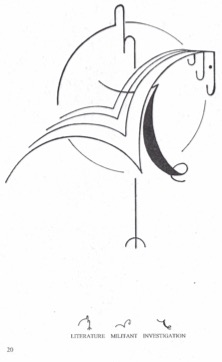 It is imperative that studies of the neo-avant-garde in Australia, and I think avant-garde studies in general, strike a balance between theory and history. One cannot just have a history of the avant-garde: a slew of good examples without a theory of what it is that makes these examples avant-garde (and in poetry, to catalogue an exhibit of key works without interrogating their poetics and aesthetics). Neither can one simply have a theory of the avant-garde that doesn’t take into account its specific histories, especially transcultural avant-gardes, those outside centres of cultural influence, those that cross hemispheric borderlines. To dream up an idea of the avant-garde without recourse to specific poems and their poetics, and without recourse (this is most imperative) to histories of reading and artistic politics, is also insufficient.

That second, italicised phrase, “artistic politics,” I take from Tyrus Miller’s 2009 book Singular Examples: Artistic Politics and the Neo-Avant-Garde, a book which explores the contradictory status of the postwar Euro-American avant-gardes, a problem for theorists “as diverse in their orientations” as Theodor Adorno, Peter Bürger and Hal Foster precisely because “if, by definition, the avant-garde aims to break with the past and bring forth the radically new, then  at the heart of the existence of a neo-avant-garde is an intolerable contradiction: an avant-garde whose newness is defined by its seeming repetition, at a later date, of an earlier historical formation” (4).

Intolerable to a point, for Miller there are grounds to make the claim that subsequent (neo/retro/post avant-gardes) were equally concerned with artistic politics. As Miller does, I want to proceed more casuistically than synthetically here, with “singular examples.” Later on I’ll offer two singular examples among many that have broad theoretical, and interventionist consequences; those of Javant Biarujia and thalia.

Before all this, though, what was the Australian avant-garde, and why the 1970s? There are material and cultural reasons for the existence of a certain historical-aesthetic formation in Australian poetry that could be termed neo-avant-garde. Postwar migration, 1945-1970, changed the composition of the Australian working and lower-middle classes. After 1970, and particularly during the Whitlam government, its impact on Australian poetry had been felt. The arrival of Jas H. Duke back in Box Hill in 1973 from Europe and the U.S.A. (having left Australia in 1966) was, conceivably, a turning point both for him and the community he found himself in: “I came back to Australia” Π.O. records Duke saying, “with my psyche in ruins. I found Australia more interesting than when I left, it had been rescued from Menzies by the migrants” (Poems of Life & Death, 24).

Duke’s subsequent impact on the community of experimental poets in 1970s and 1980s Melbourne is legendary.[1] But the decade of 70s in itself was close to revolutionary. Collective Effort press, an initiative of Π.O, thalia and others, which would support the work of Duke, began to take off. Small press thrived in Sydney through the work of Pam Brown, Cheryl Creatrix and others in Sydney producing handmades, pamphlets and chapbooks. As Ann Vickery has shown, the 1970s saw the rise of “women’s poetry” as a “literary and marketable category in Australia.”[2] In the late 1970s, Amanda Stewart would begin to write poetry and perform (by 1989, with Chris Mann, Jim Denley, Rik Rue and Stevie Wishart, Stewart had founded the performance ensemble Machine for Making Sense).[3] No figure looms so large in the neo-avant-garde moment as Ania Walwicz, whose first works began to appear in the early 1980s.

For Duke, the historical avant-gardes were a source of creative energy but certainly no decentering, anarchistic model of organisation: the European avant-garde was structured like a church or a regiment. Under the great army of Modernism, they were

Duke’s abridged story of the avant-garde as he tells it in this piece shows a fascination with its warlike demagoguery as well as a disdain for its piousness. For sound poetry in particular, the regulatory bodies of its central authorities narrowed the frames of reference along nation-state enclosures: “Although sound poetry should be able to leap the boundaries of national languages anthologists insist on inserting French sound poets into French language anthologies, Germans into German books, and Americans into books dealing with America” (7).

Duke’s sarcastic critique of the partitioning of different variants of sound poetry into national frameworks opens out those very transcultural and transnational senses we seek in making sense of post-Dismissal, neo-vanguardist poetics in Australia. Much of this can join up with questions of translation, transliteration or interlinguistic writing, critiques of Standard English and the linguistic hybridity that inform so much migrant neo-vanguardist poetry from Π.O. to Walwicz. In the case of thalia, transliteration via shorthand occasions the cultural critique of language in a disability context (more on this below).

Translation is indeed crucial to these neo-avant-garde formations. Consider the practice of Chris Edwards, who began publishing in the 1970s (from 1974-1976 he published Beyond Poetry with Cheryl Creatrix). Works like A Fluke (2005) a “mistranslation” of Stéphane Mallarmé’s Un coup de dés and more recently O Sonata: Rilke Renditions (2016) employ translational methods, including homophonic translation, in ways that queerly undo and remake those modernist texts. Kate Fagan, in her reading of Fluke, is attentive to (post/neo/retro-avant-garde contexts, noting that “‘innovation’ in non-Indigenous Australian poetry is marked historically by strong international identifications and sporadic refusals…twentieth century manifestations of these dialogues are strikingly evident in the avant-garde (or post-avant-garde) alignments of Chris Edwards’ poetry.”[4]

Perhaps no neo,- or post-avant-garde poet engages so closely with these international identifications, and issues of translation, as Biarujia, who describes A Fluke to Corey Wakeling as “A wonderful example of ‘meaninglessness’ (amphigory, interlinguistics, écriture d’ombres, lettrisme…a masterpiece in my book.”[5] In Biarujia’s 2002 book Calques, in a section marked E. (the book’s form is threefold: Q.E.D), he writes after Picasso, Masson, Klee, Ernst, Braque, Arp, Miró, de Chirico, Tanguy in a manner he calls “pataphysical interpretations”: “I have gone beyond translation, through the various ploys/plays of amphigory, paronomasia, mistranslation, dislocation, collage, etymology and “extravagation” (9). More than an homage and less than a catalogue of saints, this is a peculiar kind of neo-avant-garde poetics in that Biarujia―inventor of Taneraic, his own language, and his own name, which he changed by deed poll in 1978―would go farther than most in his quest to remake the material base of his poetics.

Take Biarujia’s latest book Spelter to Pewter (2016) a textualist’s paradise if ever there was one. The book, which Biarujia tells us contain “conceptual poems” (xi) is in three parts, the middle part made up of ten “Brancusi Études”: Even if these sharply tessellated strings, stepped in the above example, broken into two “registers” (or channels, tracks) that striate the page, strike the reader as looking obscure, they are no riddle; the phrase is from the Koran. The fifth study appears like so: In each of the études, if we include the epigraph, each poem is citational and will contrast two quotations, one as peritextual, the other in the main body of the poem. The “downward” distribution of letters, mimetically producing the verticality and curvature of Brâncuşi sculptures, could deem it visual poetry, but I think it is more than this too; the line-breaks break words into letters, but when put back together, the pleasure becomes, as Biarujia has warned us, conceptual; seers are made fierce by fidelity, and plots are insolent nonsense, the Trappist musings of Robert Lax meet invading kings. Readers will make of it what they will, but where they go depends less on the conceptual framework (Brâncuşi), as the delightful contingency of poetic thinking.

There is no denying the visuality, though, of the “Brancusi Études,” and the rich history of visual poetry in Australia requires an entire study of its own, even as a subset of broader neo-avant-garde activity from the 1970s; such a study would have to include figures like Alex Selenitsch, Richard Tipping and Pete Spence. A poet in particular who has developed an unparalleled visual poetics since the early 1970s is thalia (born 1952), whose work has been supported by Collective Effort Press. Over a sustained career, thalia has developed a visual practice from Tenosynovitis, a work-related injury she suffered as secretary and stenographer. A series of these works thalia made in response to bpNichol are available online[6] and her 1998 new & selected poems intersperses them throughout the volume, which also contains a poem entitled “Tenosynovitis -R.S.I.” In an introduction to the recent (2015) collection of these works, A Loose Thread, Π.O. explores the origins of shorthand and steganography in Ancient Greece and forward to Isaac Pitman’s standard-bearing modern shorthand, noting a certain irony in the fact that Shorthand is an “abbreviated symbolic writing method that increases the speed and brevity of writing – the very ‘factors’ in the cause of her disability i.e. the speed of industry” (9). Given stenography has traditionally been women’s labour, thalia transforms her experience of disability into feminist critique via the sustained practice or procedure of threading together the hooks and strokes of shorthand; something akin to what I have elsewhere called notational poetics. This lifelong series of works (one might even call them a long poem of sorts), span a period of nearly half a century. Here are 4 from a 207-page book: These extraordinary works are a visuo-conceptual poetics of the body.  They are horizontally and communally responsive: one is based on Jas H. Duke’s concrete poem “YOU HAVE TO KILL THE WORD BEFORE THE WORD KILLS YOU,” (thalia also wrote a small chapbook of visual works using various kinds of fonts and typefaces entitled Words Penciled on Paper [a homage to Jas Duke]). Embroidery turns into complex linguistic interbraiding with fierce politico-ethical intent:  feminist historiography means analysis and critique, literature is, or should be, militantly investigative.

These are infinitely rich texts, visual poems that do ethical-political inquiry. They call for readings. They require, as I noted in the first post, a critical vocabulary attuned to invention, attentive to the formal ingenuity of experiment. In the works of Biarujia and thalia, but a fraction of the vast body of work produced by an Australian neo-avant-garde, we see not just the imitation of the original avant-gardes, but rather an active reworking of these histories. I hesitate to use either the words “new” or “local” here, because these poets have sought something more internationalist, nay transnational; Biarujia, thalia ―plus Π.O., Ania Walwicz, Amanda Stewart, Chris Edwards and a generation that started out in the 70s―sought, and found a poetics both specific to this place and globally accessible, both directly interventionist in vanguardist traditions and impossibly various.

In the next post: “Contemporary Experimental Poetry in Australia: Tendencies and Directions” I examine some more recent continuations of the radical experimental and radical formal tradition in Australian poetry, some of which intersect with practices specific to the late digital moment. Some minor adjustment of critical terminology will be needed at this juncture, for in contemporary experimental poetry―in some ways a more freeing term―we begin to find disruptive forms of invention somewhat less reliant on vanguardist aims.

[1] For Π.O’s thrilling account of his first encounter of Duke reading, at an event in June/July 1973 organised by Chris Mann, see poems of life & death (24-5).

[2] See Vickery’s article “The Rise of Women’s Poetry in the 1970s: An Initial Survey into New Australian Poetry, the Women’s Movement, and a Matrix of Revolutions.” Australian Feminist Studies 22.53 (July 2007): 265.

[3] See an excellent recent volume of Chris Mann’s, Whistlin Is Did, published by Cordite Books in 2016.

[5] See the rest of the interview here: https://cordite.org.au/interviews/wakeling-biarujia/3/