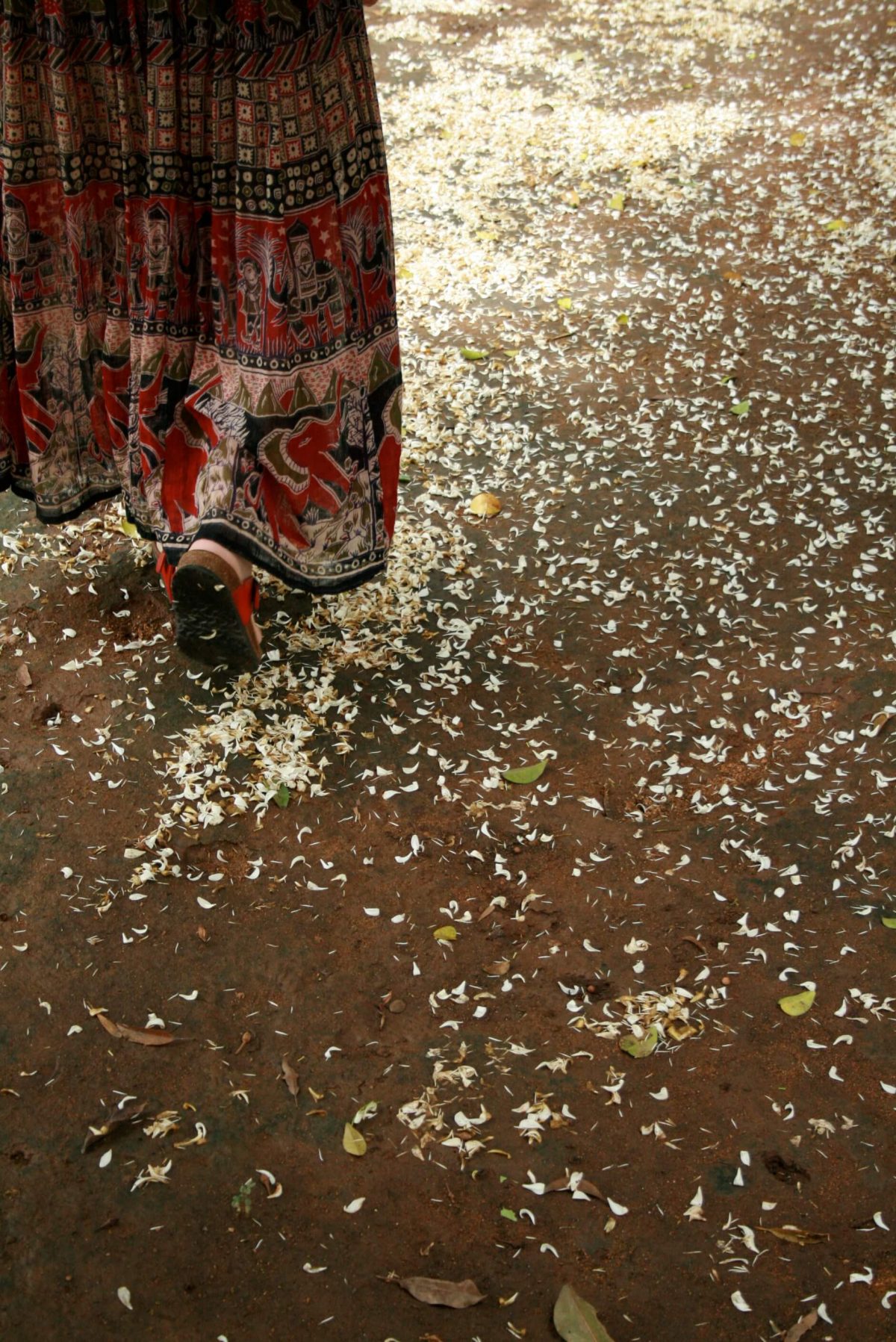 “The past is a different country,” go the opening lines of L. P. Hartley’s classic The Go-Between, “they do things differently there.”

Go-betweens like me, born to visibly different immigrant parents, are always being asked where we’re “really” from, and often wondering where we really belong.

It often felt as if my mother and I were speaking different languages — not just Tamil and Konkani and English — but, forced to translate the culture of the land of my birth to my mother, just as she translated the culture of her birth land to me, I wondered — not seeing anything of us on screen or stage or even page for years — if our stories were worth telling.

But while marginalised stories often remain unheard, I’ve felt as if sharing my stories, especially to non-Indian audiences, rendered them a kind of anthropological specimen, offered up for education or entertainment, rather than allowing meaning or understanding; judged for their perceived “authenticity”, rather than accepted for their honesty.

It begs questions beyond whose story it is: why does any story need to be told? Who can tell it? Who gets to decide what stories get to be told?  And who, exactly are we telling them to, or more importantly, for?

Last month, I saw the Belvoir Street Theatre Sydney Festival production of Counting and Cracking, a three-hour long family saga, much like, say, the Sydney Theatre Company’s even longer Harp in the South.

Telling the epic story of a family torn apart by political violence from the perspective of a young man, Sid, split by his Australian and Sri Lankan identities, it’s received, well, cracking reviews, with a sold-out season at the Sydney Festival, and headlining the Adelaide Festival later this month.

While I was thrilled to see a production with an entirely non-white cast playing such a big part in the Sydney Festival’s 2019 program, I was wary of well-meaning white people smiling indulgently at me as though whatever story was told on stage was my story too.

Don’t get me wrong: some of my best friends are well-meaning white people. But such stories can be presented not only as education or entertainment but edification: a kind of benign “tolerance” of “other” stories, allowing “mainstream” audiences the opportunity to authenticate themselves by indulging such narratives, just as those of us deemed “CALD” — a label nobody deemed “culturally and linguistically diverse” by funding bodies would ever actually use — seem to, as Penny van Toorn has argued, have to prove our “authenticity” by performatively putting our cultural identities on display, simultaneously having to prove our “Australianness” as we do our ethnic “Otherness.”

But as Nakkiah Lui (also a Westie) has pointed out, the problem isn’t racism, but privilege, and as Rebecca Solnit wrote, “obliviousness is the deficit of privilege.” That obliviousness is  reflected by the paradoxical ubiquity and invisibility of whiteness, analogous to white people saying “I don’t see colour” because theirs is invisible (we hear of the suspect of “Middle Eastern” or “African” appearance — how often do we hear of the suspect of “Caucasian” appearance?).

Let’s face it: despite inroads by Lui or Benjamin Law or Rachel Perkins or Roanna Gonsalves or Christos Tsoilkas or Shaktiradhan, Counting and Cracking’s author, theatre and literature in Australia, like politics and publishing and industry and media, is largely white, middle-class and middle-aged.

It has to be, given the ticket prices, and how rarely it tells stories outside those demographics, resulting in even further oblivious invisibility, even as it perpetuates what John Tranter called “the middle-class illusion of ‘authenticity’” in which marketplace demands commodify “authentic identity.”

But as Alexis Wright has observed, “the myth of authenticity is a notion held by those least able, and with the least right, to judge. It is the creature of the elite inheritors of our colonial oppressors.”

I was struck by an older Anglo lady — no doubt well-meaning — commenting to her equally old Anglo friend as we shuffled out during the intermission how “lovely” it was to hear such “different” stories — but how often would she say that of, say, The Go-Between, also set in a different country, as opposed to Pendle Hill, home to many Sri Lankan emigrés?

Or The Sydney Morning Herald saying that it “feeds the hunger for untold tales?”

Untold? Or unseen and unheard?

Former Prime Minister and instigator of the history and culture wars, John Howard, who called for “a grand unifying narrative” of Australian history, was vocally opposed to both our Indigenous history and immigrant future, saying that if multiculturalism “means you emphasise diversity rather than unity, then I do have a problem with it.”

But why should diversity preclude unity? Why, asked Salman Rushie in Imaginary Homelands, should anyone — whether Aboriginal, or Indian, or Sri Lankan, or any other demographic marker or cultural background — “be excluded from any part of our heritage, whether it’s being treated as a full part of society, or drawing on our roots for our art?’

“Authenticity,” like “truth” is problematic, suggesting a “pure” absolute, when, just like fiction and fact, it’s often just a question of what you believe.

Too often, the presumption by authors such as Lionel Shriver that they can tell someone else’s story better, or they somehow, by virtue of being artists, can more correctly understand someone else’s situation, often leads (as it did in her latest unreadable book) to even greater stereotypes and misperceptions and oppressions for such silenced, “spoken for” people.

When we tell other people’s stories, we have to recognise them, not simply depict them. We have to accept the truth of their perspectives, rather than regarding their criticisms as censorship — especially when by telling their stories, or assuming their voices, we are inevitably silencing them.

“Stories have been blown off course. Marooned. Caught in nets. The storytellers will need to fly higher, be braver to capture more of the world, and tell stories more imaginatively, more forcibly, and powerfully enough, to subvert the censoring narratives of inhumanity.”

I was struck, on seeing the stage — in the way I often am when I return to India, of the feeling of being home — of the painted drains, gurgling with water; of the high, metal compound gates; of the festive banana plants; of the red earth and pouring rain. Of the humid sea air of the Eastern Suburbs lapping at the washing before one of those great summer storms, and of the dry yellow heat of Pendle Hill, not far from where my mum still lives.

And, like Sid, having been brought up by a fierce, complicated single mother, leaving home (much to her consternation) to study (much to her even greater consternation) media studies, and often feeling as terrible an Indian as I was always being reminded I wasn’t “really” Australian — I couldn’t help, despite myself, seeing echoes and reflections of my and my mother’s stories in those of Sid, and his own fierce mother’s.

But while I could see all those things — despite the stage being elegantly sparse, and the staging breathtakingly inventive and evocative, leaving ample room for my imagination — did I feel it was my story because of those apparent similarities?

After all, Sri Lanka is a different country to India, just as Pendle Hill is a world away from Pennant Hills, or Bradenham is to Blacktown.

Nonetheless, the play’s depictions of the xenophobic anxieties that tore Sri Lanka apart — violent arguments about language and race and who had the greater right to belong — echoed and foreshadowed the same divisiveness and vitriols that have lately inflamed public discourse all over this “post-truth” “fake news” “alternative facts” world.

But why should I see myself in Leo, Hartley’s hapless go-between? Or Hari Kumar, the Black Englishman of Paul Scott’s Jewel in the Crown? Or Gregor Samsa in The Metamorphosis? Or Oblivious Ethyl in Wright’s The Swan Book?

There’s nothing more liberating for me than losing myself — and my fractured ego and petty self-obsessions — in someone else’s story. It’s why I read, and why I write (despite that pronoun, and in spite of writing more and more about my own life lately).

Stories are what make us human, and humanise those whose stories we hear. Is it any wonder Howard sought to erase the painful, shameful stories of colonisation, just as his acolytes Scott Morrison and Peter Dutton have fought to silence the stories of those refugees — many from Sri Lanka — who languish in offshore detention, dehumanising them by referring to them by their boat number, not their names?

But telling our stories, no matter where we’re “really” from or who we’re “supposed” to be, keeps us from being islands — much less those with “sovereign borders” — bridging those deep channels of censorship and misunderstanding.

But perhaps it’s not about telling our stories, but sharing them. Not necessarily (as any first year creative writing student loves telling me) about showing, but asking. Not about defining, but imagining.

And the best stories don’t talk at us in a monologue, but speak to us in a dialogue. It’s as much about listening as speaking. And enabling us to see more than just we want to see.

And through them, we can transcend both national and personal borders, enabling us to look inside — and beyond — ourselves. As Solnit so beautifully put it, “There is a democracy of social discourse, in which we are reminded that as we are beset with desires and fears and feelings, so are others.”

Like so many of us in this multicultural nation, I’m the sum of many parts, with different memories and stories and ways of telling them and sharing them. And my daughters, half-Indian, half-Anglo, and wholly Aussie, will have even more.

For those of us who wish to be seen as more than our religion or gender or sexuality or disability, or as more than where we or our parents are “really” from, Australia isn’t a collection of borders or placenames any more than we might be defined by any aspect of our heritage or identities.

When we share our stories, we can go beyond borders, definitions, even words, hopefully creating a chorus of song lines together that are enriched by their diversity, rather than divided by silence. And the best stories become our stories, no matter where they’re from, or where whoever’s sharing them is “really” from.

And the success of Blak Comedy, The Family Law, Please Like Me, Counting and Cracking and more only prove not only that we do want to see and hear those previously unseen, unheard stories, but that they’re about more than just the demographics. While showing us where they’re coming from, they go beyond that to become our stories too.

Like everyone else in the theatre, Counting and Cracking moved me beyond words to tears, and onto my feet for a resounding standing ovation.

I loved that the Adelaide Festival description of the show asked:

A heart-rending story of reconciliation within families, across countries, across generations… that will deepen your understanding of [the] tension between head-cracking violence and head-counting civility.”

The past is a different country — but the future is too, depending on what stories we share, how we share them, and who we share them with.

Counting and Cracking is at the Adelaide Festival from 2 March 2019. https://www.adelaidefestival.com.au/events/counting-and-cracking/

Sunil Badami will be in conversation with Deborah Williams, CEO of Creative Diversity Network UK at Belvoir St Theatre 5 March 2019.