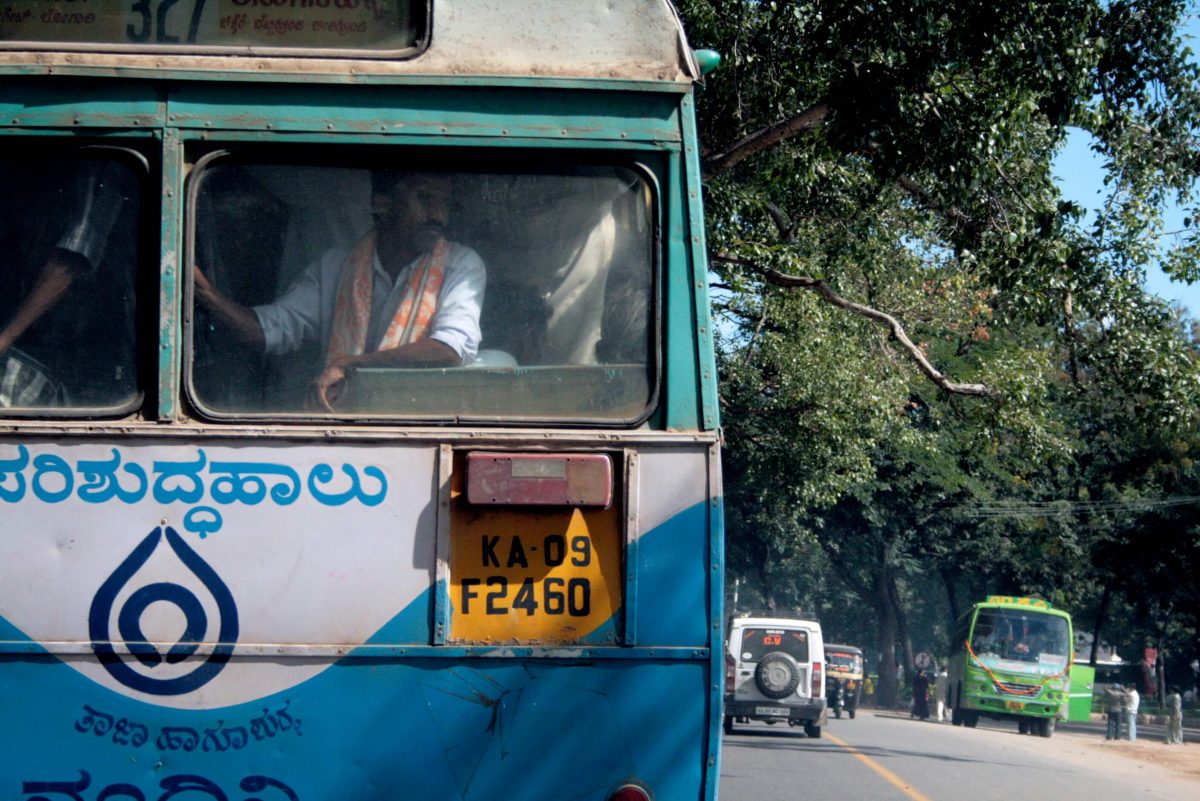 The question of whose story it is to tell is one that I’ve been thinking a lot about lately, especially as lately I’ve been telling more stories about myself and my life.

I’m not sure why. I’d much rather be imagining other people’s lives and stories than having to remember mine, or at least a large part of it — pretty much from childhood until I met my wife after a too-long, too-painful-to-recount adolescence.

While my mother told me stories about her childhood and family in India, my father refused to say anything, leaving a vast blankness on the imaginary map of his family — and myself. I could never be sure what he’d told me was true.

Even though my mother wasn’t as secretive or unreliable, like all the best storytellers, she wasn’t above embellishment. And so far away for so long from everyone whose stories she told, the stories changed with each re-telling: some details shifted slightly here, or omitted there.

Trying to determine which of those details was true, or which mattered, or which meant anything, became more difficult when we returned to India. Not only because people held such disparate and discrete recollections of those stories and their role in it, but because, as Mike Leigh might say, family history — like all history, whether national or personal — is full of secrets and lies, and when you don’t know what they might be, then all you have left is imagination.

As Salman Rushdie reflected in his seminal essay Imaginary Homelands, the imaginative truth of family history is simultaneously honourable and suspect: our sense of what is the case is constructed from such inadequate materials, almost like broken shards of pottery dug from an archaeological site, so that the fragments take on even greater meaning for what’s lost, and when we try to piece them back together, we may end up with something completely different.

It’s a danger — and a responsibility — I’m acutely aware of, especially when writing about living people, many of whom I deeply care about. Although the greatest career hazard of being a writer — apart from penury and ignominy — is a drunk uncle coming up to you at Christmas and telling you “have I got a story for you!”, in the same way that actors playing the characters in film adaptation of books we love never ever look the way we imagined the characters, who has ever really seen themselves in the stories anyone has told of them?

My mother, for example, would disagree with my recounting of her story telling style; I imagine my father would dispute it vociferously.

But who’s fictionalising who when that happens?

A while back, a story I told was re-told in a non-fiction book. I spoke with the author over the phone, and while I can’t be sure they were taking notes, they generously did me the courtesy of sending me my quotes before publication. I asked them to obscure my identity and to say I was a doctor — much harder for Indian aunties to work out who I was than if I’d said I was a writer.

Now, I can’t be sure if I approved the quotes because I was so excited to be featured in a book, or because they really did reflect what I’d said, or at least the spirit of it. But years later, when I happened upon the book again and opened to the pages where I appeared, it was as if a different person was speaking. Would I really have spoken like that?

But then, looking at things I’ve written in the past, I wonder: did I really write like that? And of course, unlike speech, so easily forgotten or misquoted or misremembered, the words remain, fixed on the page, even as the person who wrote them has changed, just like stories and memories — and hopefully for the better.

Another common hazard as a writer is people assuming what you write must be autobiographically based, especially if some of the details match your own (or else, like Edward St Aubyn’s brilliant Patrick Melrose novels, they are your life story with only the names and some litigious details changed).

Every story I’ve told has an element of “what I know” and parts of me — aspects of my personality and subconscious and memories and dreams and fears and hopes. But while it’s accepted — even expected — that there’s an element of truth in fiction, what about fiction in non-fiction?

For many critics and academics,  the desire for fact over fiction in the so-called “memoir boom” at the end of the last millennium resulted the spate of identity impostures and literary hoaxes such as Helen Demidenko or Wanda Koolmartrie, in which their two novels touted their authenticity as being based on real life, even as their authors assumed fictional personae.

The writer and academic Maria Takolander, in her examination of Peter Carey’s My Life as a Fake — itself the fictional account of Australia’s greatest literary hoax, Ern Malley — makes an analogy between ghosts and literary fakes, especially those imposters like Demidenko, whose shifting identities seemed as tenuous as a shadow.

Pretending to be someone else to write their stories is one thing — but what to make of those ghosts who write memoirs: ghost writers?

Consider the curious case of 1991’s Codename Iago, the autobiography of then-CEO of the National Safety Council of Victoria, John Friedrich. After being lauded as a brilliant executive, who’d transformed a small regional rescue organisation into a multimillion dollar enterprise that collaborated with ASIO and the CIA, Freidrich was exposed as a fraudster, with an assumed name and fake qualifications, whose own family had no idea of his real identity, just as he had begun work on his memoirs.

As it happened, the unpublished writer who was commissioned to ghost write Friedrich’s now fantastic and incredible-in-every-sense-of-the-word autobiography was forced not only to consider the fiction of what Friedrich told him, but, after Friedrich committed suicide before the book was finished, had to more or less put the shards of what he’d been told — and to guess what he hadn’t — to finish the book.

“I can vouch for the veracity of none of it. But my job was not to check facts, but only to echo John’s voice in its many and varied manifestations. This book is neither the full story nor the only story about John Friedrich… But if I believe none of [his] account, nor would I dismiss any of it as being only lies… If [he] did upon a number of occasions build a fantastic world based on nothing concrete, if he was a person who felt himself to be in disintegration and battled this sensation by continually reinventing himself, then how does he differ from the rest of us, in a world which encourages us to be in constant flight from our own true past, our own people, and the places of our childhood?”

Funnily enough, the book he’d write with the proceeds from Codename: Iago would be beaten to the Vogel and Miles Franklin awards by Demidenko’s plagiarised, historically and personally false book.

When we tell our own stories, we inevitably have to tell others’ stories too. Our parents and siblings, assorted lovers and enemies. All those people who entered our lives — and our stories — and played a part in the narrative of what happened then, or who we became as a result, every retelling fraught with as much refraction as reflection.

When I tell my own story myself — as opposed to having someone else ghost write it for me — am I inevitably, unconsciously ghosting someone else’s story? Am I fictionalising them as much as I might fictionalise myself, even as I strive to tell the truth? I certainly don’t presume, like Leon Carmen or Lionel Shriver, that I have the right to tell anyone else’s story better than they could, or without their permission — but what happens when they’re part of my story? And what happens in that liminal no-man’s zone between memory and imagination?

Still, who said that there’s no greater fiction than autobiography?

Going back to my first blog post about history and fiction, I’m reminded of Pierre Ryckmans, writing as Simon Leys, quoting “an historian” in his essay Lies That Tell the Truth:

“The historian does not merely record; he edits, he omits, he judges, he interprets, he reorganises, he composes. His mission is nothing less than ‘to render the highest kind of justice to the visible universe, by bringing to light the truth manifold and one, underlying all its aspects…”

But as Ryckmans/Leys points out, “this quote is not from a historian discussing history writing; it is from a novelist on the art of fiction: the famous beginning of Joseph Conrad’s preface to The Nigger of the Narcissus, a true manifesto of the novelist’s mission.

“The fact is, these two arts — history writing and fiction writing — originating both in poetry, involve similar activities and mobilise the same faculties: memory and imagination; and this is why it could rightly be said that the novelist is the historian of the present and the historian the novelist of the past. Both must invent the truth.”

Somewhere in the chthonic depths of the Mitchell Library, there’s a copy of a heart shaped map — the first ever featuring Terra Australis, along with the usual dragons and sirens — by the famed cartographer Oronce Fine, which describes it as “recenter inventa sed nondum plene cognita,” or “recently discovered but not yet completely known.”

“Discovery” is related to the Latin word “inventare” that means, among other things, “to find, invent, devise, contrive, acquire, locate, come in, show itself and find oneself.”

And that’s what telling stories can do, especially those we tell ourselves or about ourselves. Perhaps that’s what Ryckmans meant when he said that both historians and novelists must invent the truth, even — especially — with lies that tell the truth.

But the questions remain: why do we want to tell other people’s stories? What happens when we do?  Whose story is any story anyway? And whose truth do those lies become?